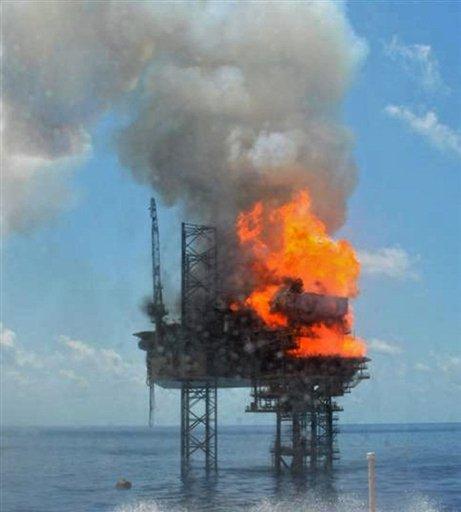 BP America, whose well in the Gulf of Mexico is spewing 1,000 barrels of oil each day after a rig explosion last week, joined with other oil companies last year to oppose stricter safety and environmental rules.

A company executive said the existing voluntary standards were sufficient.

"We are not supportive of the extensive, prescriptive regulations as proposed in this rule," wrote Richard Morrison, BP's vice president for Gulf of Mexico production. "We believe industry's current safety and environmental statistics demonstrate that the voluntary programs implemented since the adoption of [voluntary standards] have been and continue to be very successful."

The Minerals Management Service rules have not been implemented. Attempts to reach MMS officials for comment were unsuccessful.

No cause has been determined for the explosion on the Deepwater Horizon rig, which was drilling a well into BP's Macondo Prospect in an area known as Mississippi Canyon Block 252, about 50 miles off the Louisiana coast.

But when it proposed the rules, MMS said most accidents and spills can be traced to human error or organizational failures and said companies need to ensure safe and environmentally sound operating practices (Greenwire, June 16, 2009).

MMS regulations historically have focused on proper equipment operation, but the agency said at the time that equipment failure is rarely the primary cause of incidents.

An MMS review last year found 41 deaths and 302 injuries out of 1,443 oil-rig accidents from 2001 to 2007. The agency's analysis found a lack of communication between the operator and contractors, a lack of written procedures, a failure to enforce existing procedures and other problems.

"The MMS believes that if OCS [outer continental shelf] oil and gas operations are better planned and organized, then the likelihood of injury to workers and the risk of environmental pollution will be further reduced," the proposed rule said.

The voluntary approach was adopted in 1994 during the Clinton administration.

The proposed rule (pdf) would have required lessees and operators to have their safety and environmental management system (SEMS) programs audited at least once every three years by either an independent third party or by qualified personnel designated within the company. MMS could evaluate the third parties, meet with lessees and operators to periodically review the results of SEMS program audits, and conduct announced or unannounced evaluations with MMS personnel or third parties.

A BP source said the company did not oppose higher safety standards but took issue with MMS's approach. Among other concerns, company officials worried that by focusing on four areas of human behavior, the rule diminished the importance of other safety factors.

"It's not that we were opposed to the rule," said a source familiar with BP's dealings on the rulemaking. "It really for us was how the rule was worded."

Morrison's letter (pdf) said MMS already had safety and environmental regulations in place. He suggested that existing rules could be revised to include a "hazards analysis," stating that "human factors should be considered in this analysis."

Morrison said that if MMS were going to rewrite the rules, it should develop a "performance based" rule rather than a "detailed, proscriptive" program.

"We understand MMS's desire to improve OCS performance and we share in the concern for safety of personnel and protection of the environment, however, the proposed rule prescribes stricter requirements than the approach on which it is based, and may generate significant difficulties for operators and contractors to abide by the rule," wrote (pdf) Jonathan Armstrong, the operations integrity management systems-emergency response supervisor for Exxon Mobil's operations in the United States.

MMS records show that BP Exploration and Production was fined $41,000 in 2007 in connection with a "loss of well control" event in November 2002. There was no pollution or injuries.

BP has also been recognized by MMS for its safety record on the outer continental shelf. The company is a finalist for the agency's SAFE award, along with Eni US Operating Co. and Exxon Mobil. BP was leasing the Deepwater Horizon rig from rig owner Transocean.

Click here (pdf) to read Morrison's letter in opposition to the proposal.