Investigate Role of Tagum City Officials, Police in a Decade of Murders

Human Rights Watch REPORT: "One Shot to the Head"

(Manila) – The Philippine government should investigate an alleged “death squad” implicated in several hundred killings in Tagum City on the southern island of Mindanao, Human Rights Watch said in a new report released today. Official police records obtained by Human Rights Watch show 298 killings between January 2007 and March 2013 that provincial police attributed to the “Tagum Death Squad,” and for which no one has been prosecuted.

The 71-page report, “‘One Shot to the Head’: Death Squad Killings in Tagum City, Philippines,” details the involvement of local government officials – including Tagum City’s former mayor, Rey “Chiong” Uy – and police officers in the extrajudicial killings of alleged drug dealers, petty criminals, street children, and others over the past decade. The report draws heavily on interviews and affidavits from three self-proclaimed members of the death squad in Tagum City who took part in its killing operations. It also examines the failure of the Philippine government to seriously investigate the death squad and bring those responsible to justice.

Since 1998, when he was first elected Tagum City’s mayor, Rey Uy,  along with close aides and city police officers, hired, equipped, and paid for an operation that at its height consisted of 14 hit men and accomplices. Many were on the city government payroll with the Civil Security Unit, a City Hall bureau tasked with traffic management and providing security in markets and schools.

“There is compelling evidence of the involvement of Tagum City police and former Mayor Rey Uy mayor in a death squad that operated during Uy’s 1998-2013 tenure as mayor,” Kine said.  “The Tagum death squad’s activities imposed a fear-enforced silence in Tagum City that allowed the killers and their bosses to literally get away with murder.”

The 12 killings Human Rights Watch documented typically occurred outdoors, on the streets, and often in broad daylight. The hit men, wearing baseball caps and sunglasses and armed with .45 caliber handguns, would arrive and depart on government-issued motorcycles. Former death squad members told Human Rights Watch that they would routinely inform local police via text message of an impending targeted killing, so the police would not interfere. After the killing, the police in turn would notify them if any witnesses had identified them.

Those targeted were primarily people that Mayor Uy had declared to be the “weeds” of Tagum society, namely suspected petty criminals and drug dealers, as well as street children. The death squad drew its targets from the “order of battle” or OB, a list of names coming from various sources, including local community leaders, neighborhood watchmen, and police intelligence officers. Names of drug suspects were provided by the Philippine Drug Enforcement Agency and the Department of the Interior and Local Government.

The Tagum Death Squad also apparently carried out “guns-for-hire” operations that Uy was either unaware of or did not specifically commission, such as the killing of  a journalist, a judge, at least two police officers, and a tribal leader as well as local politicians and businessmen. In several cases, the death squad’s handlers would fabricate drug allegations against the target of a contract killing to justify to Uy their murder.

Former Tagum Death Squad members told Human Rights Watch that the unit was paid 5,000 pesos (US$110) for every killing, which the members would divide among themselves. They said that on at least two occasions, Uy personally paid the death squad members for two killings. A former hit man who was himself attacked by his former colleagues surrendered to the Davao del Norte provincial police and later agreed to testify in a case filed against Uy and others. Targeted killings have continued but with less frequency since Uy stepped down as mayor in June 2013.

The Tagum Death Squad was initially a crime-fighting group patterned after the death squad in nearby Davao City, which propelled that city’s mayor, Rodrigo Duterte, to national fame. In February 2011, Uy issued an explicit warning to “criminal” elements in the city advising them to “go somewhere else.” A senior official of the governmental Commission on Human Rights described these murders as “silent killings” because they were hardly ever reported in the media.

Local and national authorities have failed to seriously investigate the vast majority of Tagum City’s killings, Human Rights Watch said. While police routinely cite a lack of witnesses to explain the absence of prosecutions, victims’ relatives and witnesses say they fear testifying, largely due to the perceived links of the death squad to local officials.

On April 28, 2014, the media reported that the Philippines National Bureau of Investigation had recommended the prosecution of four security guards employed by the Tagum City government for their alleged role in the abduction, torture, and murder of two teenage boys in February 2014. The current Tagum City mayor, Allan Rellon, reportedly told the media that he was “bewildered” by the allegations, saying that, “As a local chief executive, I abhor any form of summary killing.”

President Benigno Aquino III has largely ignored extrajudicial killings by death squads in Tagum City and other urban areas. He has failed to condemn local anti-crime campaigns that promote or encourage the unauthorized use of force to rid city streets of “undesirables.” A much-vaunted initiative by the administration to address impunity – the creation in 2012 of a so-called “superbody” to expedite the investigation and prosecution of cases of extrajudicial killings – has remained largely inactive even as new cases were reported by Philippine human rights groups. 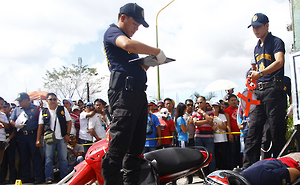 Police officers at the crime scene of the murder of Rogelio Butalid, a broadcast commentator, outside his radio station in Tagum City, in the southern Philippines on December 11, 2013. A witness told Human Rights Watch that a Tagum Death Squad member shot Butalid at point-blank range.[/caption]

Other national institutions responsible for law and order, namely the Department of Justice, the Philippine National Police, the Ombudsman’s Office, and the Commission on Human Rights have largely been inactive in combatting death squads.

Human Rights Watch has previously published a103-page report, “You Can Die Any Time: Death Squad Killings in Mindanao,” on a ‘death squad’ active in Davao City and the government’s failure to investigate the involvement of police and local government officials in targeted killings.

Human Rights Watch called on the Aquino administration to direct the responsible government agencies to take measures to stop the killings in Tagum City and elsewhere, thoroughly investigate death squad killings and the death squads themselves, and bring justice to the victims’ families. Immediate attention should be given to the situation in Tagum City and the role of former and current government officials and members of the police in abuses.

“The Philippine government’s failure to act decisively against death squad killings has certainly contributed to the horrific death toll in Tagum City, “ Kine said. “President Aquino needs to send a loud and urgent message that deploying death squads as a ‘crime control’ measure is unlawful and needs to stop.”

Selected accounts from the report

“They said they wanted to clean up Tagum, to bring change to Tagum, so that bad elements would think twice in coming in because they would end up dead in Tagum.” – Romnick Minta, former member of the Tagum Death Squad, May 2013.

“[The police] fully knew beforehand of the execution of such killing and that in every summary killing investigation they always appeared at the scene of the killing to see if we are positively identified by witnesses or not.” – Romnick Minta, former member of the Tagum Death Squad, May 2013.

“You can’t disobey the mayor’s order. His power is higher than the chief of police. If the mayor gives his order, it gets implemented…. My colleagues would tell me, when I was new, to keep quiet. ‘These officers are the mayor’s men.’… So we just kept quiet. We couldn’t arrest them. We couldn’t do anything when they’re in front of us. But we knew what they were doing.” – Police intelligence officer who started investigating the Tagum Death Squad, May 2013.

“[A] number would receive a lot of calls and texts identifying suspected criminals. Our task was to check out the names, whether these people actually were committing the crimes they were accused of committing. If we confirmed it, our leaders would then assign the job [to kill the alleged criminal].” – Jomarie Abayon, a former Tagum Death Squad member, February 2014.

“The asset [hit man] arrived at around 5 p.m. and stayed by the billiards table.… I had no idea that they were planning to kill [Jerome]. When Jerome came out after his nap, the asset left because somebody called him [from outside].… Two men then appeared at about 6 p.m. But we learned afterward [from other witnesses] that they were already casing the place as early as 4 p.m. When Jerome took his nap, [the assailants] were already here….They shot him first from behind; he didn’t see them. He turned around and the other killer shot him, too, hitting him in the armpit. He was shot four times in the body. They took turns shooting him.” – “Toto,” pseudonym of a teenager in Tagum City whose friends (among them Jerome, killed in September 2011) were murdered by the Tagum Death Squad, September 2011.