Peru’s ‘Human Fat Killers’ were Invented to Cover Up Deaths

Police may have concocted story to divert attention from unlawful killings 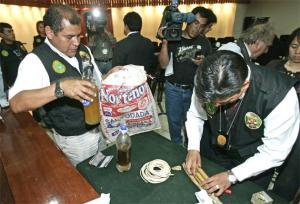 Police displayed what they said were bottles of human fat

When police in Peru announced that they'd broken up a criminal gang who roamed the Andes killing peasant farmers, draining the fat from their dead bodies, and then selling it to European cosmetics manufacturers for use in expensive anti-aging skin creams, there was widespread shock and revulsion although medical experts were quick to sound a note of scepticism.

A functioning kidney, or liver, is worth thousands of dollars, but there is no black market in human fat, they pointed out. Surgeons carrying out liposuction operations throw away gallons of the stuff each week.

Yesterday, the experts were vindicated. Peru's police chief was forced to sack his top organised crime investigator amid growing evidence that he and several colleagues deliberately invented the elaborate story to cover up evidence of officers being involved in dozens of unlawful killings.

A fortnight ago, the sacked officer, General Felix Murga had claimed to have arrested four members of "an international criminal network trafficking human fat". The "gang" had carried out between 30 and 60 murders a year, in the country's central Huanuco province he had claimed.

The macabre details of the alleged gang's activities garnered international media attention. And opposition politicians now believe that police invented the story to divert attention from allegations that officers had killed 46 suspects in 2007 and 2008 in the coastal town of Trujillo. "My hypothesis is that they were mainly trying to cover up the tremendous revelation of extrajudicial killings of criminals in Trujillo made by Ricardo Uceda ... in Poder magazine," the former deputy interior minister, Carlos Basombrio, wrote on his blog yesterday.

If so, then the senior cops certainly knew how to tell a tall story. At the original press conference, they played a video of one suspect "confessing," before showing off two soft drink bottles filled with a yellow fluid they said was human fat that had been decanted for export fetching prices of nearly £10,000 a litre.

Journalists were told how victims were approached on remote roads and lured to a hut in the jungle. There the police claimed, they were bludgeoned to death. Heads, arms and legs were cut off, the police had claimed. Major organs were removed and discarded. Candles were placed beneath the torsos, so that melting fat would dribble into pots and other collecting vessels. Investigators in Huanuco, who complain they were excluded from the inquiry, now believe the four arrested men, who are still in custody, had carried out only one murder, linked to the cocaine trade.

They say they may have bottled that victim's fat to intimidate rivals in an area rife with drug trafficking.