Paladino Took Government Money by Pledging to Deliver Jobs, but instead Pocketed the Money - The Constantine Report
0 SHARES

GOP Watch » Paladino Took Government Money by Pledging to Deliver Jobs, but instead Pocketed the Money

Paladino Took Government Money by Pledging to Deliver Jobs, but instead Pocketed the Money 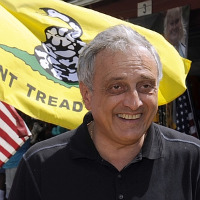 An investigation by the New York Daily News finds that New York GOP gubernatorial candidate Carl Paladino, a multi-millionaire real estate developer, promised to revive the economy of Buffalo by creating new jobs, received $3 million in state tax breaks to do so, but then pocketed the tax refunds while delivering very few jobs:

His Empire Zone investments consisted mostly of renovating his own buildings – $19 million worth. He completed no new construction and brought no new businesses in any of his Empire Zone projects. Instead, the Paladino companies such as the Ellicott Group mostly generate income through six big office buildings that collect millions of dollars in rent.

To justify tax breaks in one instance, he sold a dozen vacant lots he owned to himself and claimed hundreds of thousands of dollars in “real property investments.” Seven years later, these “investments” remain what they were – vacant lots.

Ironically, Paladino claims his campaign is standing up for taxpayers. For instance, he wants to slash the state’s Medicaid spending by almost half because, he said, New York invites anyone to “come here and sit on the backs of our taxpayers.”

Speaking before New York business leaders this past week, Paladino pledged to cut taxes for the rich, including across-the-board cuts in corporate franchise taxes. “I will provide businesses relief from the onerous taxes and regulations strangling them today,” Paladino said. “I’m going to make our businesses competitive again.” But his own experience suggests that cutting taxes for the wealthiest is hardly the best way to jump-start the economy.

One of Paladino’s properties lost its Empire Zone tax credits during a state review last year, “with the state arguing the property did not create enough jobs to justify the tax breaks.” Perhaps the taxpayers should be telling Paladino: “Don’t tread on me.”

Carl Paladino Interview (Neither Adultery nor his Penchant for Bestiality are Discussed, but He Rages Like Robert DeNiro – Got a Problem with that, Pal?)