"... Known as Operation Paperclip this was one of the most daring operations of the war. ... The man who ran the team of rocket scientists was General Walter Dornberger and it was Miller’s task to convey a secret message to him from Eisenhower outlining the nature of Operation Paperclip and guaranteeing the safety of the scientists and their families once delivered into American hands ..." 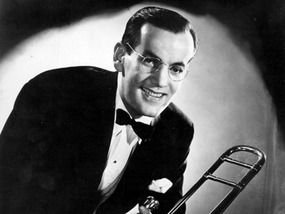 AN EXTRAORDINARY new book claims the bandleader didn't die in a plane crash but was tortured and then killed after he tried to help Nazi scientists escape from Hitler's Germany.

IF VERA Lynn was the Forces’ Sweetheart for the British in the Second World War then bandleader Glenn Miller was the male equivalent for Americans.

The unique sound of the Glenn Miller Band poured out of radios and jukeboxes between 1939 and 1944 boosting the morale of troops serving overseas and comforting the folks back home with classic tunes such as In The Mood, Chatanooga Choo Choo and String Of Pearls.

When he joined the army in 1942 he was considered one of America’s greatest weapons in the propaganda war against the Nazis.

He was, to all intents and purposes, a national hero, in spite of never having seen active combat. His mysterious disappearance on December 15, 1944, while on a flight across the English Channel to France in a USAAF single engine UC-64 Noorduyn Norseman plane brought an outpouring of grief that would have flattered a president. But that was just the beginning of the story.

In the decades since, many individuals have questioned the official version put out by SHAEF (Supreme Headquarters Allied Expeditionary Forces) of the circumstances of Miller’s “death” at the age of 40 and claimed the Major’s fate was covered up by the American military.

In an intriguing new book: The Glenn Miller Conspiracy, Hunton Downs, a former Colonel in the US Army and a Pulitzer Prize nominated journalist effectively gathers all the information to date and uncovers fresh evidence to shed light on the mystery.

In 1944 a variety of undercover operations were in play in a bid to put an end to the war and hasten armistice.

The failure of the attempt to assassinate Hitler by his own generals, codenamed Operation Valkyrie, increased the desire by a cadre of Wehrmacht generals to bring the war which they were obviously losing to a rapid end.

Secret negotiations, codenamed Operation Eclipse, began with the Supreme Commander of SHAEF, General Dwight D Eisenhower, through US General George C Marshall and Wehrmacht General Gerd von Rundstedt who unlike his SS counterparts was not prepared to back a losing Führer. In order to be effective they needed someone to broadcast to Germans what was happening, and why, to win them over to the idea of armistice.

Major Glenn Miller of the Army Air Corps was an obvious choice. His family originally hailed from Germany (the Muellers) and he could speak the language, helped by some cramming lessons from the OSS (Office of Strategic Services, the military precursor to the CIA).

Miller was in fact already making secret broadcasts from the BBC in London directed at Germany (the Germans loved his music) as part of the psychological warfare propaganda programme or “psywar” and had been targeted by the SS for assassination.

In simple terms, Miller was assigned to broadcast the reasons behind Operation Eclipse from the German national radio station Deutschland sender in Berlin to assuage any concerns of the German people which would follow the proposed armistice.

There was one further task required of the bandleader. American intelligence had discovered that the Nazis were at least two years ahead of the Allies in the development of the atomic bomb. The US put into operation a plan to discover the bomb (which didn’t in fact exist, as it turned out) and bring the scientists responsible back to America for “safe” keeping.

Known as Operation Paperclip this was one of the most daring operations of the war and successfully brought, among others, Wernher Von Braun to the US, the man responsible for propelling America ahead in the space race.

The man who ran the team of rocket scientists was General Walter Dornberger and it was Miller’s task to convey a secret message to him from Eisenhower outlining the nature of Operation Paperclip and guaranteeing the safety of the scientists and their families once delivered into American hands.

There was a further complication. All this covert to-ing and froing had to be kept from the Soviets. The need for urgency was because Stalin’s Red Army was closing in and the Russian leader had plans for Hitler’s rocket scientists himself.

By this stage Paris had been liberated and Eisenhower had shifted his base of operations to the Trianon Palace in Versailles. It was from here, Downs contends, that Miller was flying when he disappeared. What happened next is conjecture and speculation larded with fragments of evidence and eyewitness reports.

There is no doubt that the Nazi espionage network was infinitely superior to that of the Americans and they had managed to infiltrate the very heart of the operations – Eisenhower’s staff. As a result of an information leak from his Versailles HQ, Eisenhower’s Operation Eclipse failed with the appalling consequences and savage death toll of the Battle of the Bulge.

Eisenhower was, of course, a prime target for assassination by the Nazis and the principal player in the ruthless game was Colonel Otto Skorzeny, Hitler’s go-to guy for dirty tricks. Skorzeny was adept at disguising German troops as Allies and infiltrating them deep into enemy territory.

But he needed someone special to accompany his gang of assassins who would get past the guards at Trianon Palace and within shooting range of Eisenhower. Information arrived about the movements of Major Glenn Miller and he set a plan in motion that, according to Downs, led directly to the bandleader’s death.

The sequence of events runs thus: Miller flew to Versailles to collect the message from Eisenhower to General Dornberger. He was then required to fly to General von Rundstedt’s house near Krefeld to discuss the armistice speech before going on to make his historic broadcast over Radio Deutschlandsender.

Once he had done that, he was to deliver the message to General Dornberger to get the rocket scientists out of Germany. Arriving in Krefeld, Miller expected to be met by the “good” Germans, sympathetic to the generals’ truce; unfortunately, thanks to superior Nazi Gestapo agents who had tracked his every move, he was met by Colonel Otto Skorzeny.

Skorzeny’s plan was simple and evil. He needed to persuade Miller to accompany him back to Eisenhower’s HQ with his “American” soldiers. In a captured US plane with conspicuous American markings (captured or damaged allied planes were regularly rebuilt by Nazi engineers and used to enter enemy territory like Trojan horses) Skorzeny flew Miller back to Paris, probably under sedation or beaten unconscious, and spirited him to a brothel in Montmartre called The Sphinx.

What happened inside is too awful to imagine. Skorzeny’s thugs were unable to “turn” the loyal bandleader, in spite of his German ancestry, and tortured him. Downs admits Miller’s final moments might never be known. But witnesses report seeing his body thrown into the street outside the brothel where it was retrieved by US military police and “disappeared” to prevent scandal.

This was to form part of a story put out by Hitler’s spin doctor Josef Goebbels that Glenn Miller had been found dead of a heart attack in a Paris brothel. Goebbels naturally neglected to mention that The Sphinx was also an SS hangout and a place for interrogation.

If it is another conspiracy theory, it seems, distressingly, that this may be the one closest to the truth. Downs himself died in April this year and therefore can no longer be interrogated on his findings. But his research, his commitment to investigating the mystery of Glenn Miller’s disappearance is very impressive.

He makes a convincing case for a coverup, even if he cannot quite nail the final details of what did actually happen.

Sixty years is a long time to devote to finding the truth whether it’s out there or not. The final irony is that while the music of Glenn Miller may not mean as much to the current generation of American music lovers there are two countries where his unique big-band sound is more popular than ever: Germany and Japan.

Another important operative in Project Paperclip was Major Clay Shaw, the CIA co-conspirator District Attorney Jim Garrison indicted (via grand jury) in 1967 for his involvement in the JFK assassination. Shaw was responsible for smuggling Nazi war criminal Werner von Braun into the US to take charge of the US rocket program. Garrison believed von Braun also had major oversight responsibility in the JFK assassination (as the head of the security division NASA he was the liaison for the Mexican ranch where the key snipers were housed). I write about my involvement in 1984 with one of the surviving assassination witnesses in my recent memoir THE MOST REVOLUTIONARY ACT: MEMOIR OF AN AMERICAN REFUGEE.