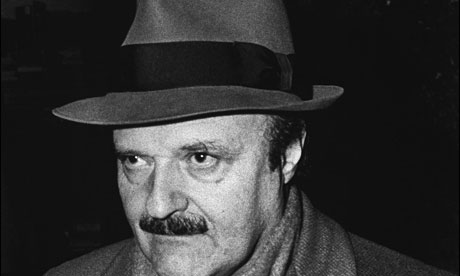 One month before the 30th anniversary of one of London's most enduring murder mysteries, the mafia godfather at the heart of the case has spoken for the first time about why he believes the real killers of Italian financier Roberto Calvi will never be brought to justice.

Calvi, dubbed "God's banker" because of his work with the Vatican, was found hanging from scaffolding beneath Blackfriars bridge in London on 18 June 1982. Bricks had been stuffed in his pockets and he had more than £10,000 in cash on him. In the months before his death he had been accused of stealing millions being laundered on behalf of the mafia.

His death was originally ruled a suicide but later judged to be murder. In July 1991, Francesco "Frankie the Strangler" Di Carlo, a mafia godfather who had lived in England since the late 1970s, was named as Calvi's killer by a supergrass. Di Carlo has since become a supergrass himself.

Speaking from the small town in central Italy where he now lives, Di Carlo related how he first came to hear that he had been accused of Calvi's murder.

"I was in university – that's what I called the prisons in England. We were all in the association room watching television when the news came on that the killer of Calvi was Francesco Di Carlo. All the prisoners and guards looked over and stared. I just shrugged my shoulders and said that they must be talking about someone else with the same name as me."

Di Carlo seemed a likely suspect. He had arrived in the UK in the 1970s, relocating shortly after being linked to the murders of two Sicilian police officers.

He bought businesses and a palatial home but soon came under the watchful eye of British customs, who believed he had moved in order to oversee the Cosa Nostra's operations in the UK. Between 1980 and 1985 customs officers allegedly linked him to at least a dozen multimillion pound drug hauls, only a handful of which were intercepted.

In 1985 Palermo's flying squad attempted to extradite Di Carlo to Italy in connection with an earlier case. Within weeks of the request, the deputy head of the squad and a commissioner in charge of tracking down fugitives had both been shot dead.

Di Carlo was eventually linked to an attempt to smuggle £60m worth of heroin to Canada through London and was found guilty at a five-month trial at the Old Bailey, although he claims to have been the victim of a conspiracy.

The police officers escorting him to court each morning told how, as they were led from the cells, Di Carlo's co-defendants would bow and kiss his hand as they passed him, standard protocol for greeting a senior godfather figure.

Although Di Carlo denies killing Calvi, he admits that he and his mafia colleagues wanted him dead and that his boss had attempted to contact him to carry out the hit.

"I was in Rome and received a phone call from a friend in Sicily telling me that a certain high-ranking mafia member had just been killed. I will never forget the date because of this: it was 16 June 1982 – two days before Calvi was murdered. The friend told me that Pippo Calò [known as the "mafia's cashier"] was trying to get hold of me because he needed me to do something for him. In the hierarchy of Cosa Nostra, he was a general, I was a colonel, so he was a little higher up, my superior.

"Calvi was naming names. No one had any trust in him any more. He owed a lot of money. His friends had all distanced themselves. Everyone wanted to get rid of him. He had been arrested and he had started to talk. Then he had tried to kill himself by cutting his wrists. He was released, but knew he could be rearrested at any time. He was weak, he was a broken man.

"I was not the one who hanged Calvi. One day I may write the full story, but the real killers will never be brought to justice because they are being protected by the Italian state, by members of the P2 masonic lodge. They have massive power. They are made up of a mixture of politicians, bank presidents, the military, top security and so on. This is a case that they continue to open and close again and again but it will never be resolved. The higher you go, the less evidence you will find."

Di Carlo became disillusioned with the direction the organisation was taking, deciding to become a supergrass.

"My grandfather was the first to be in the Cosa Nostra and the rest of my family followed. Back then the system was different. We were a guarantee for people who had no justice, we were there for the defence of the weak.

"We were not against the state, we were a state within the state. We had solicitors, doctors, ministers. We would get the politicians elected and we would command them. And we made a comfortable living. There were rules. You could not kill women or children or innocents. You could not kill journalists because they were just doing their job.

"If you wanted to kill someone, there had to be a reason. They had to be harming the organisation. You could kill a policeman because he was lying about you, but not for doing his job. You kill one, another comes along, so what have you achieved? Nothing.

"But then things started to change. Drug trafficking came in and made people very rich. People had too much money and power. The scruples were lost. Magistrates were being bombed along with women and children. It wasn't Cosa Nostra any more, it was Cosa Monster. I didn't want to be a part of that so I decided to turn. My life now is very different, very quiet, but I am happy."

11 June 1982 Roberto Calvi goes missing from his apartment in Rome.

18 June 1982 Calvi is found hanging from scaffolding under London's Blackfriars bridge, weighed down with bricks and £10,000 cash in currencies on him.

July 1982 An inquest finds that Calvi had killed himself.

July 1983 A second inquest returns an open verdict on his death.

December 1998 Calvi's body is exhumed as his family press for answers, insisting he was murdered.

5 October 2005 Five defendants are put on trial in Rome for the banker's murder.

6 June 2007 All five defendants are acquitted of the charge.