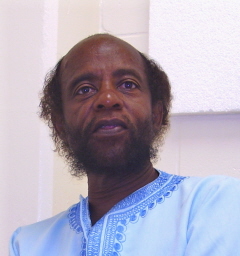 Mondo we Langa (formerly David Rice) has filed an application with the United States Court of Appeals for the Eighth Circuit seeking permission for a hearing in U.S. District Court on new evidence. Mondo, a former leader of the Omaha, Nebraska chapter of the Black Panthers called the National Committee to Combat Fascism, is serving a life sentence for the August 17, 1970 bombing murder of an Omaha policeman.

Burger decided to use Mondo’s case to roll back the “Warren Court” era and deprive prisoners of habeas corpus protection in federal courts when state courts are available. Hoover had targeted Mondo for counterintelligence actions and personally approved the withholding of a FBI crime lab report on the 911 call that lured policeman Larry Minard to his death to make a case against Mondo. Mondo was implicated in the murder by the confessed 15 year-old killer, Duane Peak who also claims to have made the 911 call, and by dynamite supposedly found in Mondo’s basement. Steadfastly denying any involvement in the crime, Mondo remains imprisoned four decades later.

The Eighth Circuit U.S. Court of Appeals ordered a new trial for Mondo back in the 1970’s over the search of his house but the Supreme Court denied the order in a consolidated case, Stone v. Powell. Mondo’s case was the immediate proof that Stone v. Powell was going to have lasting negative implications for prisoners when his case was not heard on the merits.

New scientific testing of the 911 tape revealed that it was not Duane Peak who made the call as he testified, leaving an unknown killer at large. The Nebraska Supreme Court ruled last year in the case of co-defendant Ed Poindexter, also serving a life term, that the tape wasn’t critical information for the jury. However, the voice of the killer is something that just will not go away and is the subject, in part, of Mondo’s petition for habeas corpus filed last week in U.S. District Court.

“Several unusual events have occurred throughout the course of Mondo’s proceedings that cast aspersion upon his jury verdict. First, approximately one month before the explosion, one of the primary investigative officers from the Omaha Police Department, Sgt. Jack Swanson, stopped three black men in north Omaha and seized from the trunk of their vehicle a case of DuPont Red Cross dynamite. All three men were charged with felony possession of explosives, but each had their case dismissed approximately one week after the jury found Mondo guilty in the spring of 1971.”

“Coincidently, on August 22, 1970, Sgt. Jack Swanson claimed to have also found a case of the exact same type of dynamite in the basement of Mondo’s house.”

“Interestingly, Sgt. Bill Pfeffer was deposed in 2006 and stated under oath that he was the person who found the dynamite in Mondo’s basement. He later testified at co-defendant Poindexter’s post-conviction hearing in 2007 to the same thing. When confronted with the inconsistency in his sworn testimony, Pfeffer became incredulous and extremely defensive.””

“Mondo’s case also occurred during the racial turmoil of the late 1960s and the early 1970s. Specifically, the FBI had instituted its COINTELPRO program designed to create internal fractures in the political groups it had targeted. History teaches that the Black Panther movement was targeted by the FBI in this program, including fringe groups associated with the Black Panthers.”

“Furthermore, Mondo was the victim of racial hatred by OPD which included him being called numerous racial epithets by law enforcement and being repeatedly harassed by members of OPD.”

Mondo we Langa and Ed Poindexter have come to be known as the Omaha Two and are both imprisoned in the maximum-security Nebraska State Penitentiary.