Obit.: Keyboardist Merl Sauders was Booked on Flight 93, but Rescheduled to Watch a Football Game 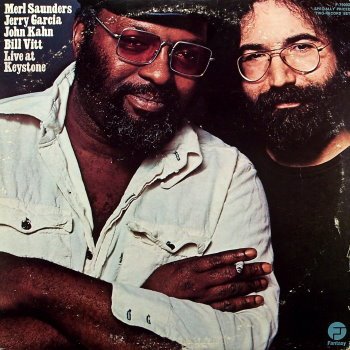 The 74-year-old musician suffered a debilitating stroke 6 1/2 years ago and, although he lost the ability to speak, he made numerous sentimental guest appearances at shows over those years playing with one hand.

“I never met anybody so happy who had a stroke,” said Grateful Dead drummer Mickey Hart. “In the end, the only thing that lit him up was the music. Sometimes he’d cry, but I’ve never seen anybody so happy in the realm of music.”

After serving in the Army from 1953 to 1957, he played jazz organ on the same circuit as Jimmy Smith and Brother Jack McDuff. He worked as musical director of the Billy Williams Revue and served in a similar capacity in Oscar Brown Jr.’s off-Broadway show “Big Time Buck White.” He backed up Dinah Washington and jammed with Miles Davis. Mr. Saunders, who was rarely seen in public without his trademark aviator shades and black leather fisherman’s cap, started playing with Garcia in 1971 at a small Fillmore Street nightclub called the Matrix, where the Grateful Dead guitarist liked to hold informal jam sessions on Dead nights off. Within months, the loose-knit band was playing to packed houses at small local clubs like the Keystone Korner in North Beach every weekend the Dead wasn’t working. Members sometimes included former Creedence Clearwater rhythm guitarist Tom Fogerty and former Journey rhythm guitarist George Tickner.

The Saunders-Garcia Band, as the group came to be called, backed Mr. Saunders on his 1971 solo album, “Heavy Turbulence,” and recorded two albums for Berkeley’s Fantasy Records.

“Merl was an ensemble guy, a groupist,” said Hart, who played with Mr. Saunders in his early ’80s solo group, High Noon. “He brought those sensibilities to the Garcia band. He let Jerry have his flights of fancy.”

Mr. Saunders told The Chronicle in 1972 that playing with Garcia offered them both an opportunity to experiment and explore different forms of music. “We do it just for fun,” he said.

With the addition of saxophonist Martin Fierro in 1974, the group transformed into the Legion of Mary and disbanded the following year. Mr. Saunders also played in Reconstruction with Garcia in 1979 and 1980. Garcia appeared on Mr. Saunders’ 1990 solo album and video, “Blues From the Rainforest,” a surprise hit on the New Age music charts.

After Garcia fell into a diabetic coma in 1986 and lost some of his basic motor skills, Mr. Saunders spent hours daily with the stricken guitarist running scales, working him out on jazz standards such as “My Funny Valentine.”

Mr. Saunders’ music appeared on such soundtracks as “Fritz the Cat” and “Steelyard Blues.” He worked on the TV series “Nash Bridges” and, as musical director of the 1985 TV series “The New Twilight Zone,” inveigled the Grateful Dead into a new recording of the classic theme song.

In his first public appearance following the stroke, Mr. Saunders attended the September 2004 CD release party at the Great American Music Hall, and played a handful of notes on the keyboard.

Mr. Saunders cheated death twice before. He was booked to return to San Francisco on United Flight 93 out of Newark, N.J., on Sept. 11, 2001, but decided to take an earlier flight so he could get home in time to watch the 49ers on Monday Night Football. In 2002, he underwent surgery for cancer, only weeks before his stroke.

He is survived by his longtime companion, Deborah Hall; his sons, Tony of Martinez and Merl Saunders Jr. of Novato; daughter Susan Mora of Oakland; six grandchildren; and one great-grandchild.

Previous Article
Prescription Opiates and Kids: One Pill can Kill
Next Article
Comments on Naomi Klein