"Into the Nightmare": SFSU Professor Joseph McBride Finds a New Angle on the JFK Assassination - The Constantine Report
0 SHARES

Assassinations » "Into the Nightmare": SFSU Professor Joseph McBride Finds a New Angle on the JFK Assassination

"... 'To confront the truth is very disturbing because that means you have to do something about it,' McBride says. And, in writing the book, 'I confronted the truth. It wasn't easy for me, because I lost my faith in the American system. But I felt that I've made a contribution as an individual by shedding light on parts of the story.' ..."

New Angle on the JFK Assassination

Noted film historian, critic, and journalist Joseph McBride has quietly maintained a parallel career for decades. While he was writing acclaimed biographies of Orson Welles, Steven Spielberg, John Ford, and Frank Capra, while he worked as a columnist and critic forDaily Variety, and while he taught in the Department of Cinema at San Francisco State University, McBride dedicated a separate track of his life to researching the assassination of President John F. Kennedy.

Last month, McBride released the product of his decades-long effort, Into the Nightmare. The book documents his investigation and focuses on a little-understood piece of the assassination's puzzle: the murder of Dallas police Officer J. D. Tippit, who was purportedly (according to the Warren Commission) killed by Lee Harvey Oswald 46 minutes after Oswald shot the president. McBride's research has led him to believe that Oswald could not have shot Tippit, which by extension would tend to cast doubt upon the validity of the Warren Report's other conclusions.

"To confront the truth is very disturbing because that means you have to do something about it," McBride says. And, in writing the book, "I confronted the truth. It wasn't easy for me, because I lost my faith in the American system. But I felt that I've made a contribution as an individual by shedding light on parts of the story."

McBride frames the book as a memoir, recounting his experience working for and meeting Kennedy during the 1960 Wisconsin primary (McBride is a Milwaukee-area native). He also recalls the sense of promise Kennedy embodied as president, and the jarring trauma of his assassination. 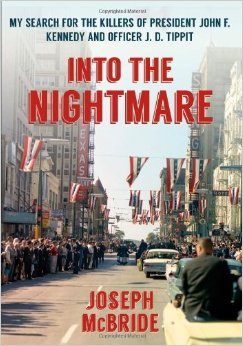 In the book, McBride discusses the development of his early suspicions, which he traces to the day of the assassination. These were primarily incited by Oswald's calm, rational denials in his brief television appearances after his arrest, and by Oswald's live, televised murder by Jack Ruby in the basement of the Dallas police headquarters two days later. McBride is equally frank about the temporary satisfaction of his suspicions by the Warren Commission, which released its findings in September 1964. But shortly after the release of that report, McBride became aware of independent assassination researchers such as Sylvia Meagher (author of Accessories After the Fact) and Mark Lane (author of Rush to Judgment), whose books identify crucial errors and omissions in the Warren Report and examine the likelihood of a conspiracy behind the assassination. They, and others, inspired McBride to revisit the creeping doubts he felt the day Kennedy was killed.

McBride describes his approach to writing Into the Nightmare by quoting the influential assassination researcher Penn Jones, former editor of the small-town Texas paper the Midlothian Mirror, who advised others to "take one area of the case that has been neglected and research the hell out of it." The idea being that, whereas no one person could tell the entire story of a case so expansive, a person who focuses on one area may uncover something significant..

McBride began to research the assassination in earnest in the late 1970s, after the Church Committee (the nickname of the United States Senate Select Committee to Study Governmental Operations with Respect to Intelligence Activities, chaired by Senator Frank Church) "revealed that our government had been involved in attempts to assassinate foreign leaders," he says. "This possibly validated criticisms of the Warren Report." In 1982, McBride began to focus on the murder of Officer Tippit — per Jones's suggestion, an area of the case that had been neglected.

"Oddly," says McBride, "there was very little in the Warren Report on [Tippit]. The report relied entirely on ballistics evidence to say that Oswald killed Tippit, because their main witness, Helen Markham, was very unreliable. If you study the bullets and cartridges [that were entered into evidence], they don't link to Oswald's gun. An FBI expert testified that he could not link the cartridges to Oswald's pistol."

In addition, Dallas policemen in the vicinity testified that the killer used an automatic weapon, whereas the Warren Commission said it was a revolver. (When Oswald was arrested at the Texas Theatre 40 minutes after Tippit's shooting, he was carrying a revolver.)

Beyond the ballistics evidence is a suspicious timeline. Oswald was seen at his rooming house at 1:04, and that was nearly a mile away from the site of Tippit's shooting. McBride places the time of the shooting at 1:09; his basis for this includes a wide range of references, including the testimony of T.F. Bowley, an eyewitness who arrived on the scene at 1:10.

"There's no way Oswald could have walked that distance in five minutes," says McBride. "It takes anywhere from 12 to 15 minutes."

In his research, McBride examined witness testimony, Tippit's background, and the officer's other activities that day, and found that the "official" circumstances of his murder are misleading. One of the most significant interviews McBride conducted was with Tippit's father, Edgar Lee, who had never been interviewed before. The elder Tippit provided McBride with one of the book's biggest revelations.

"Mr. Tippit told me that a Dallas police officer had gone to J. D.'s widow, Marie, and said J. D. and he had been sent to hunt down Oswald in the aftermath of the assassination — but that this second officer had not made it because he was in a traffic accident," McBride says. "I found evidence there was indeed a traffic accident nearby around the time of the shooting. The significance of this is manifold, because at the time, Oswald's identity, officially, was not known to the Dallas Police Department, which indicates that Tippit was part of a plot to frame or perhaps murder Oswald."

McBride acknowledges the fact that Americans seem to be of two minds about the Kennedy assassination. On one hand, polls routinely show that a majority of the nation believes there is more to the story than what the Warren Report has to say. But, on the other hand, there is a stigma attached to assassination researchers, who are often referred to as paranoid, obsessed, or "conspiracy buffs."

"The public, as Noam Chomsky likes to say, is smarter than the politicians and the media," he says. "Most of the people who are wedded to the lone gunman theory are government and media people. They can get very vicious and dismissive. I describe in the book that there was a CIA memo issued in the '60s about how to deal with skeptics — how to imply that they're crazy and they're in it for the money. All these tropes they've put out have been very effective. You keep hearing them all the time, and they do filter down to ordinary people."

As with any investigation, McBride encountered his fair share of blind alleys, red herrings, and frustrating gaps in available documentation.

"It was a difficult book to write, because you'd like it to be less time-consuming," McBride wryly notes. "This is a 50-year-old cold case. They say in criminology that most murders are solved within a few weeks or a month. After that, it's hard to prove things because witnesses scatter and die; evidence and leads get lost. There are some things we will never know, as much as we might try."