God’s Harvard: A Christian College on a Mission to Save America 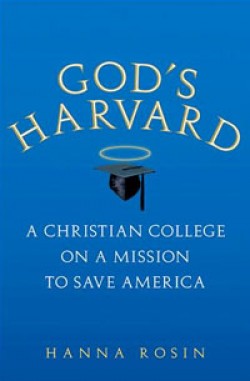 When Hanna Rosin began reporting on Patrick Henry College in 1999 for the Washington Post, her first impressions were understandably skeptical. Located an hour northwest of Washington, D.C. in Purcelville, Virginia, it’s a conservative evangelical school with a student body of around five hundred, and has existed for less than a decade. In many ways, Patrick Henry is still in the process of establishing a solid foothold; faculty turnover has been high, and last spring’s edition of official newsletter The Trumpet of Liberty celebrates the school’s new status as an officially accredited institution.

And yet as Rosin writes about her first visit in the introduction of God’s Harvard, founder Michael Farris had outlined a “revolution” even before laying the first brick, to “enlist the purest of born-again Christians in a war to ‘transform America’ by training them to occupy the ‘highest offices in the land’ ”. His goals may not have been modest, but Patrick Henry has already established remarkable inroads within the Republican Party and become a target of extended liberal criticism. How does such a school manage to become a flashpoint of the culture war? Just as importantly, how do Patrick Henry’s students place themselves within Farris’ overarching vision?

As Rosin details, Farris is the founder of the Home School Legal Defense Association, and he is primarily responsible for the burgeoning evangelical home schooling movement over the past two decades. Around eighty-five percent of Patrick Henry’s students are evangelical home schoolers, all with high scholastic potential; the average SAT score range of the student body that Rosin cites is 1230-1410, on par with the University of Virginia and Rice University. The school’s curriculum is primarily designed to prepare students for political and cultural leadership roles, with the first two years focusing on classic liberal arts (literature, philosophy, history), and the second two years involving government and political science courses, internships, and a senior research seminar.

In many ways, this formula has been quite successful to date. Rosin finds that out of roughly one hundred White House internships that are available annually, PHC has “taken between one and five of those spots in each of the past five years—roughly the same as Georgetown”. Many other students have landed internships with Congressional Republicans, and graduates have worked for the White House, FBI, CIA, and various conservative think tanks. Liberal critics have interpreted these rapid accomplishments (particularly the White House internship rate) as a potentially dangerous alliance between church and state.

It’s not an accident that out of the several anti-religious right books released in 2006, more than one, including Michelle Goldberg’s Kingdom Coming and Lauren Sandler’s Righteous, argue that Patrick Henry is evidence of how certain evangelicals and fundamentalists seek to conquer American government, as well as the intellectual tragedy that occurs when college students are indoctrinated into an overly certain and narrow worldview.

In relation to these studies, God’s Harvard does offer some corroborating evidence. Patrick Henry’s students are largely confident that God’s plans appear within conservative politics, and the school newspaper’s editorials parrot White House policy. In her profile of Derek Archer (who is now a senior), Rosin describes his encounter with an upset deacon while helping younger kids distribute flyers in a church parking lot for 2005 Virginia gubernatorial nominee Jerry Kilgore. As Rosin writes, “It had never really occurred to him that a church would consider campaigning and worship to be at odds with each other; in his mind, they served the same purpose. Now he could see, ‘it’s rather controversial’ ”. Finally, she notes at the end of the book how the imperative to take back the nation “haunts” graduates “even more strongly than it did while they were in school,” and expresses her doubt that any of the students “would ever moderate their views enough to win my vote—not for president, congressman, or even city councilman”.

Yet while Rosin clearly disagrees with Patrick Henry’s mission, her thorough research, which included extensive observations during the 2004-05 and 2005-06 academic years, allows her to present a more nuanced (and more plausible) picture of the school. Crucially, she documents the cognitive dissonance and agency among the students, and is able to delineate between Farris’ dreams of creating incorruptible culture warriors and their own personal goals for the future.

Girls struggle with a strict student conduct policy that often specifically targets them, such as a dress code monitoring bare midriffs and exposed bra straps. Additionally, they face the traditional gender expectations that are commonplace within conservative evangelicalism, including chastity and complementary gender roles, which emphasizes innate gender differences and the primacy of male leadership.

Student Farahn Morgan’s efforts to counter these forms of inequality are particularly noteworthy. Rosin finds that “Farahn seemed highly conscious that she was blooming in a very tight space”, and her dissatisfaction leads to a meeting with the student dean to challenge mandatory church attendance. Her self-expressed sense of “innate fatalism”, including describing herself as a “Christian nihilist”, is certainly at odds with the type of worldview that Farris promotes. (She later transfers to Wake Forest.) Even more conventional female students recognize the difficulty of planning their career ambitions while operating within an environment of institutionalized sexism, and small forms of resistance (such as moving off-campus) become symbolically significant.

It is also important that Rosin documents how even many of Patrick Henry’s professors become discontent with Farris’ vision. In the above-mentioned book Righteous, Sandler cites Robert Stacey’s “Freedom’s Foundations” course as just another example of an “education that constantly circles back to the Bible”. Sandler is correct about Stacey’s intent for the course as part of a Bible-based curriculum, but Rosin’s observations are more complete. She finds that he challenges what he calls “Christian revisionism” regarding the faith of Founding Fathers, and teaches his students “to read widely and critically…to question all received wisdom”, both completely antithetical to how Farris approaches his section of the course, even though Stacey is simply promoting critical thinking skills.

Perhaps unsurprisingly, a power struggle emerges between Farris and Stacey over the latter’s pedagogy, eventually resulting in his termination. Students refer to the crisis in terms of 9/11, and the resulting fallout eventually leads to the voluntary departures of several other professors. Rosin acknowledges the possibility that Farris’ curriculum can create ready-made, power-hungry future politicians, but she also convincingly points out that the school’s inability to reconcile its faith objectives with classic liberal arts is ultimately not conducive to creating like-minded culture warriors.

While these documentations of subjectivity and infighting may not seem all that remarkable, they are significant when considering the broader context of God’s Harvard . As religion journalist Jeff Sharlet
recently analyzed for The Revealer, many non-evangelicals who write about evangelicalism tend to analytically reduce what is a complex subculture to a monolithic movement or a voting bloc without much room for dissent. This tends to be an issue with many of the recent anti-religious right books, where the authors paint a rigid, conformist view of their subjects. There are certainly severe problems that have manifested within evangelicalism due to a lack of critical self-analysis, homophobia being a current example, and I think Rosin’s narrative demonstrates how the inherent myopia of Farris’ mission can negatively affect Patrick Henry’s students.

Yet it’s also important to remember that evangelicals rarely find agreement among even theological issues, and while conservative evangelicals in particular have formed powerful majority viewpoints on certain social policies, that doesn’t guarantee those viewpoints will pass along to future generations in a tidy manner. In short, evangelicals are much like any other subculture in that internal conflicts arise as cultural and historical changes affect their priorities. I think that Rosin (who is Jewish and an East Coast native) understands this quite well as an outsider, and she is consequently able to present her opposing viewpoint in certain spots without resorting to sweeping generalizations or deterministic statements.

With that said, it’s still frustrating that she doesn’t expand upon the question of how those who disagree with Patrick Henry’s mission should respond, especially if the school is able to overcome its problems and gain tangible ground in the culture war. Her contentions in the conclusion are mostly limited to her belief that evangelicals “are far too entrenched in American politics and culture to drop out en masse”, and that the school is capable of creating Farris’ model of potential political leaders despite the challenges that are involved.

In a Beliefnet debate last month entitled “Evangelicals in Power,” Rosin offered some important thoughts, such as arguing against the necessity of having “political disagreements” that are “loaded with the weight of sin and evil”. Such a statement is helpful for thinking further about the issue (as is the rest of the debate), but it would have been nice to see her articulate such thoughts in God’s Harvard, where she could have easily relied upon the strength of her research to provide some more insight.

In spite of this, Rosin’s study provides an accomplished example for future investigations of evangelical politics, and she offers fair and necessary critiques of Patrick Henry’s idealism and limitations. Even if the school has succeeded in placing itself within the halls of power, its internal contradictions demonstrate the tenuous nature of that power, regardless of claiming God as a trump card.