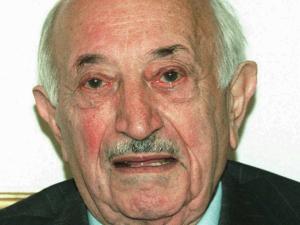 BUDAPEST —  Nazi-hunters from the Simon Wiesenthal Center have named 95-year-old Hungarian Laszlo Csatary as their most wanted war crimes suspect and have asked Hungary to prosecute him, an expert at the centre said.

In its annual report, the centre said that Csatary, who is accused of helping organize the deportation of about 15,700 Jews to the Auschwitz death camp from the Slovakian city of Kosice in 1944, had returned to Hungary from Canada. Csatary was the commander of police in Kosice, which was part of Hungary during the Second World War. The centre said he had  escaped to Canada after the war only to be stripped of his Canadian citizenship in 1997.

On Friday, Efraim Zuroff, the Israel Director of the Wiesenthal Centre, told Reuters that a person in Hungary who wished to remain anonymous had tipped it off about Csatary’s whereabouts via email.

“We know where Csatary is and the information was given to the Hungarian prosecutors … he’s in very good health as we know,” Zuroff said in a telephone interview.

“We are waiting to see what happens,” he added.

Gabriella Skoda, a spokeswoman for the Budapest Prosecutors’ Office, confirmed in a statement that a war crimes investigation had been launched in September 2011, based on a report from Zuroff. But she did not name a suspect in the statement.

“In the investigation we collect data related to the content of the report,” the statement said. “The prosecutors have so far not heard anybody as a suspect in the case.”

Since his precise whereabouts in Hungary remain unknown, it was not possible to contact Csatary for comment. He has not spoken to the media or responded to the allegations against him in the past.

The Wiesenthal Center has spotted several war crimes suspects from the Second World War in the past decade in its Operation Last Chance.

After a German court convicted John Demjanjuk, a former Nazi guard last year, the Center launched a second phase of the Operation, offering a $32,900 reward for information leading to the prosecution or punishment of war criminals. Demjanjuk died in a care home at the age of 91 last month.

Another suspect, former Hungarian gendarme officer Sandor Kepiro, died at 97 in September in Budapest after a court cleared him of involvement in killing more than 1,000 civilians in the Serb city of Novi Sad in 1942.