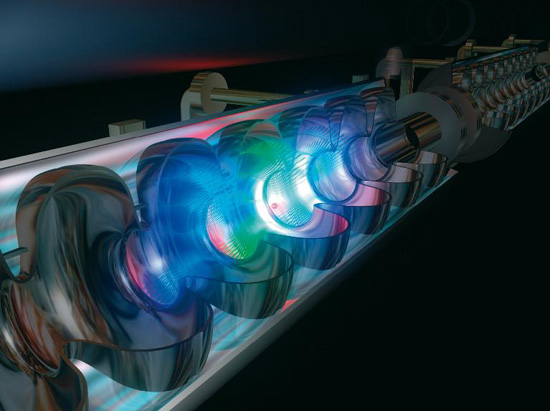 The Office of Naval Research has been working away on a suite of futuristic weapons, but it's hard to think of anything that could out-gun its free-electron laser, which by the mid 2020s, should be capable of slicing straight through 2,000 feet of steel every second.

The U.S. Navy has been working on directed energy weapons for years now, and for good reason: warships are the ideal platform for a powerful laser, at least initially, since they've got both the space and the power that weapons-grade laser systems require. These first lasers (to be deployed within the next decade) are likely to be traditional solid-state lasers that fire coherent beams of light, kinda like laser pointers. But unlike (most) laser pointers, these ones will be in the hundreds of kilowatts range, easily capable of blowing stuff up.

The problem with solid state lasers, though, is that the wavelength of light that they pump out is fixed, and depending on the weather, the beam can get significantly weaker over distance. So, the laser of choice by 2020 will be the far sexier free-electron laser, which can output energy in multiple wavelengths and doesn't require any of the bulky and heavy solid-state infrastructure.

Free-electron lasers are basically just particle accelerators that can convert fast-moving electrons into photons. The more electrons you stuff into them, the more photons they spit out, at whatever wavelength (or wavelengths) you want. In February, the Navy's prototype free-electron laser produced a 200 kilowatt beam capable of burning its way through 20 feet of steel per second. Ultimately, the target is a megawatt of power, which would mean eating a hole 2,000 feet of steel per second.

Currently, the free-electron laser is about the size of a football field, which is a bit too big to install on anything short of an aircraft carrier. But as improvements in technology enable the laser to shrink, it'll also become more efficient, and by 2015 the goal is to get it down to 50 feet by 20 feet by 10 feet. And by 2020? It might be smaller still, able to fit into helicopters and drones, and it's not too much of a stretch to imagine something small enough to be handheld by 2030.