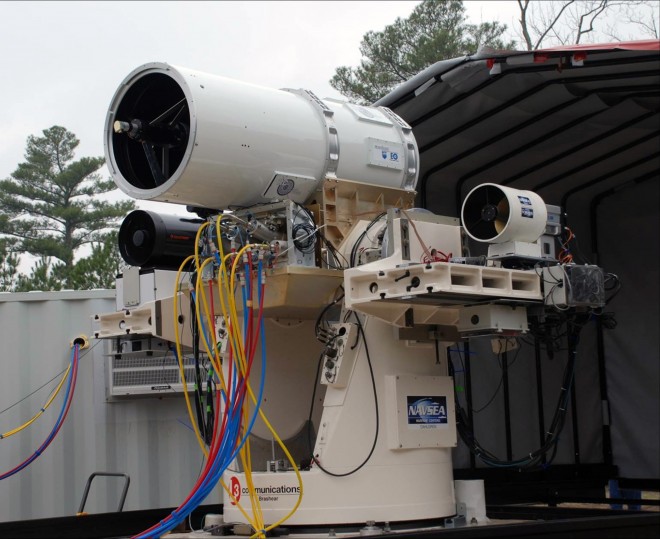 For years, the U.S. Navy has been pursuing a workable ray gun that could provide a leap ahead in ship self-defenses. Now, with a series of tests of a system called the Laser Weapon System, or LaWS), it may be one step closer to that goal.

It’s certainly not the first time lasers have shot down an unmanned aerial vehicle — last year, the Air Force zapped several drones with beam weapons in a series of tests at China Lake, Calif. — but this test brings an additional bit of realism — and an extra technical challenge. Laser beams can lose strength as they move through the moist, salty sea atmosphere above the sea, so the Navy needs directed-energy weapons that can work effectively on ships.

The LaWS is essentially a laser upgrade to the MK 15 Close In Weapon System (CIWS), a.k.a. the Phalanx gun, a radar-guided autocannon that is already installed on Navy surface combatants. According to NAVSEA, the system tested (shown here) fired a laser through a beam director installed on a tracking mount, which in turn was controlled by a  Mk 15 CIWS. That’s the basically same system that controls the Phalanx.

It represents a possible next step for the Phalanx system, which is currently limited by the range of its 20mm autocannon (Raytheon, manufacturer of the Phalanx, is also marketing a missile system to replace the gun). The Phalanx is a last line of defense against sea-skimming anti-ship missiles and hostile aircraft, but the laser wouldn’t replace the gun completely. Theoretically, directed energy weapons would increase the range of the system, but you would still have the gun as a backup if the laser fails to do the job.

LaWS might also have other applications: land-based Phalanx guns have been used to shoot down incoming  rockets and mortars in Iraq and Afghanistan, and a laser Phalanx could — theoretically — avoid the problem of the “20mm shower” (unexploded rounds falling back to earth).

And after all, what’s a holiday weekend at Danger Room without news of the latest directed-energy weapon?