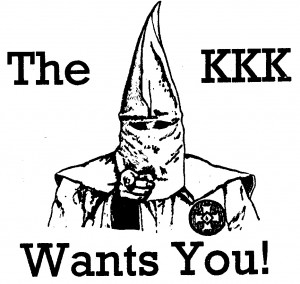 Crawford resigned in 1987 after two years as North Carolina grand dragon of the Christian Knights of the Ku Klux Klan. He estimated at the time that he had led more than 200 street walks in communities all over the Carolinas.

Earlier that year, Crawford was sentenced to 30 days in jail and fined $500 for burning a cross at a Charlotte Klan rally.

North Carolina Democratic Party officials also are condemning the comments of Bivins Hollar, a candidate for the state Senate from Catawba County.

Both Hollar and Crawford filed as Democrats.

Hollar posted a video in which he talks about shooting and starving black South Africans and kidnapping the country’s president. Hollar denied making the video, which soon disappeared from YouTube, according to a report from the Charlotte Observer.

“The North Carolina Democratic Party believes that hate based, violent, racist positions are fundamentally anti-American,” wrote state party chair David Parker in an emailed statement Thursday. “While we support an open democracy and the freedom of eligible citizens to seek elective office, we condemn any individual who uses his or her candidacy to spread fear and advocate violence regardless of their Party affiliation.” 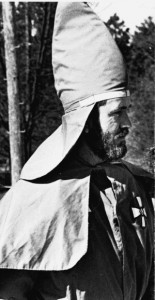 Crawford would not acknowledge his past Klan leadership to the Post. He stated in February that he has “no affiliation with them whatsoever.”

In a phone interview Wednesday where the Klan was not mentioned, he said, “About 26 or 27 years ago, I was in a different place in a different time. The only people I stand behind now is the American Legion and God.”

When called for comment about the party’s statement, Crawford repeatedly hung up on a Post reporter Thursday before any questions could be asked.

“Other than avoiding questions, we haven’t seen a strong rebuke or repudiation of his past,” Robinson said over the phone Thursday.

In interviews as a Klan leader, Crawford said the group was not about hatred or violence.

His speeches focused on what he saw as social and economic injustice, including perceived favoritism toward minorities, according to past Salisbury Post reports. Crawford opposed racial integration in schools.

Veleria Levy, chair of the Rowan County Democratic Party, said Crawford is welcome to come to party meetings and share his political stances, but the group does not currently support him. “As a party, we disassociated ourselves from him because of the bigotry and hatred,” Levy said. “As an African-American woman, I personally in no way support him.”

In Parker’s statement, the state chair called on local Republicans to join in its “condemnation of any racist and violent views.”

Local Republican chairman Greg Edds called this “a positive stand that we can all agree on.”

“We are pleased to see that the North Carolina Democrat Party is taking steps to distance itself from Democratic candidates who promote racial hatred, violence and bigotry,” Edds said.