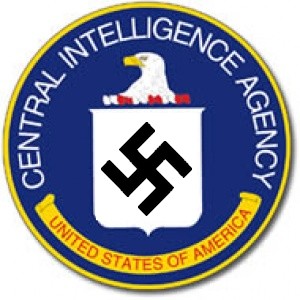 The first half of the discussion led by Carlson focused on some of the inner workings and history of the CIA, including interrogation methods and experiments like the code named MK-ULTRA experiment in the 1950s that involved mind control through the application of drugs, and use of torture like exposing prisoners to extreme weather conditions, isolation, electroshocks, and so on.

Carlson noted the fact that people do not tend to think about history prior to 9/11, and so many of the things that have occurred in the country before that time, including acts done by the CIA, tend to be forgotten.

“One thing that troubles me as a historian is that people make the claim that history is irrelevant,” Carlson said. “After Sept. 11 it’s like we’re in a new world, everything is different, there’s new security threats; why bore us with this old, ancient history?”

The second part of the discussion led by Zwerling touched on the presence and role that the CIA and other intelligence agencies play on university campuses. According to Zwerling, what the CIA is looking for is to recruit some of what they call the best brains in the United States. 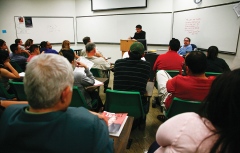 Testy Topic - Dr. David Carlson led the first half of a panel on the history of the CIA

“They have spent a lot of time shaping and molding our intelligence and they continue to do so today through their presence here on this campus,” he said.

The panelists explained that when the CIA decided to diversify personnel earlier in the decade, it spent millions of dollars at majority women’s colleges, majority native tribal colleges, historically black universities and Hispanic-serving institutions like UTPA. Eleven colleges across the country were targeted and offered money: UTPA responded and won a grant for $2.5 million for a period of five years. After this, the IGKNU was created.

According to Zwerling, UTPA has created classes for studying the intelligence community as well as a summer school enabling what he called “spies” to bring high school students on campus. A certificate program was created to develop a minor in intelligence and global collaboration, as well as a master’s program.

“Over 63 years the CIA has continually aimed at finding ways into the academic world of the United States to use it as a base for recruiting agents,” Zwerling added.

Representatives from the IGKNU program, as well as the dean of the College of Social and Behavioral Sciences college were contacted and asked to participate in the discussion, but said that due to scheduling conflicts they were not able to attend; some just declined the invitation.

The problem with the CIA recruiting students, Zwerling claimed, is that they don’t inform students of the real reasons behind the recruitment. After a student decides to join the agency he or she cannot tell anyone on campus he is part of the organization and come graduation, is fully committed to it.

“This university is about sharing research, it’s about honesty and openness and this is violated at the most basic level by the CIA,” Zwerling suggested.