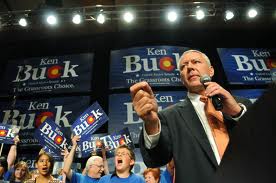 " ... Ken Buck (Colo. gubernatorial candidate): worked for Dick Cheney during the Iran-Contra investigation; later worked at the Department of Justice and as a local district attorney and U.S. attorney. ... "
http://www.newsweek.com/blogs/the-gaggle/2010/09/20/daily-debunk-the-myth-of-the-inexperienced-tea-partiers.html

Huffington Post: "Republicans on Tuesday night experienced the third leg of what is being pegged as the 'Tea Party Triple Crown' when local Attorney General Ken Buck pulled off an upset over former Lt. Gov Jane Norton in the Colorado Republican Senate primary. ... Opposition researchers quickly provided reporters with instances in which Buck echoed some of the more outlandish positions that have come to define his Kentucky and Nevada Republican counterparts respectively. ... He has called Social Security a 'horrible policy' that would 'bankrupt' the country within a 10-to-25 year window. 'I don't know that the federal government should be involved in a retirement plan,' he said at a Constitutionalist Today Forum in March 2010. 'It should be a plan that certainly, once people pay into it, they have an expectation of getting a retirement and they're entitled to that. But the idea that the federal government should be running health care or retirement or any of those programs is fundamentally against what I believe. ... "
http://www.huffingtonpost.com/2010/08/11/ken-buck-is-third-leg-of_n_678504.html

GOP Insider in Tea Party Drag Yearns for a Theocracy

" ... Buck's rise to political prominence doesn't seem easy to distill into conventional definitions. While he has embraced the Tea Party label, his biography reflects more of an insider elitism than anti-establishment sentiment. He graduated from Princeton University, where he wrote his thesis on Saudi Arabian history. From there he was recruited to serve under then-Congressman Dick Cheney to work on the Iran-contra investigation in 1986. After that stint he essentially stayed on the taxpayer's payroll, working for the U.S. Attorney's Office in Colorado before he was a D.A.

"He has been a government attorney since 1988. ... His wife was a vice chairman of the [state] Republican Party for eight years. ...

"Having establishment ties isn't the only anti-Tea Party feature in Buck's personal resume. Though he doesn't go so far as to call for state-sponsored religion, Buck has called for a 'much closer relationship' between church and state ... "

" ... Then there was the late primary snafu, when Buck, caught on a live mic, urged 'those dumbasses at the Tea Party to stop asking questions about birth certificates while I'm on camera.' ... "
http://www.huffingtonpost.com/2010/08/11/ken-buck-is-third-leg-of_n_678504.html