“God is a Fascist!”: The Ideology of Romanian Fascism - The Constantine Report
0 SHARES

Anti Semitism » “God is a Fascist!”: The Ideology of Romanian Fascism

Before the Christian Coalition: "... Romanian fascist ideology is, in many ways, similar to Western European fascism. ... The [fundamentalist Christian] religious element of Romanian fascism was utilized by the Iron Guard to gain the support of the rural population of Romania where religious beliefs were the strongest. The Iron Guard used religious themes for most of their propaganda. ..." 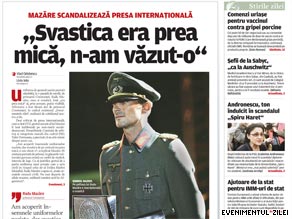 Like most European fascist movements, Romanian fascism emerged out of the political, economic, and ideological crisises that followed World War I.  However, the development of Romanian fascism is distinct from the development of fascism in Western Europe because of the unique political history of the Romanian state.  Although Romania was granted independence in 1877, attempts to denationalize and politically and economically dominate Romania by the Turks, the Greeks, the Russians, and Western Europe contributed to the formation of a fascist ideology that was uniquely Romanian.

The economic crisises that followed World War I had a significant impact on the development of Romanian fascist ideology.  The gradual transition of the Romanian economy during the 19th and 20th centuries from an agricultural base to a more capitalist structure resulted in high unemployment and the worsening of conditions for the peasantry, the working class, and the petty bourgeoisie.  For example, illiteracy and infant mortality for the rural population of Romanian was among the highest in Europe.  The centralization of capital in the hands of a few resulted in sharply defined social differentiation between the urban and rural populations.  For example, the Romanian countryside, which contained a large proportion of the population, consumed only ten percent of all industrial products between 1936 and 1937, while the urban population consumed ninety percent.  These economic conditions contributed to political unrest and dissatisfaction among the petty bourgeoisie (the main political base of the Iron Guard) and among conservative intellectuals, who questioned the efficacy of the capitalist model for Romania.  The significant amount of foreign investment by Western European nations, particularly France and Britain, in Romania (foreign investment represented over thirty percent of the Romanian economy) and the tendency of Romanian economics and politics to be governed by foreign investment concerns contributed to a sense of hyper-nationalism and xenophobia in Romania.  In addition, the failures of capitalist model were linked to Romanian Jews.  The petty bourgeoisie, who were hit hard by the economic difficulties of the interwar period, blamed their predicament on the "capitalist" Jews and nurtured the virulent anti-Semitism that was to later characterize Romanian fascism.

The Crisis of Liberalism: "Government By Rotation"

The ineffective political organization of the Romanian state during the interwar period contributed to the development of fascism in Romania.  The failure of Romanian parliamentary democracy was the result of inefficient and ineffective political institutions and fluctuating electoral laws.  Romania's poorly structured electoral system and the habitual crushing of oppositional forces by violent and illegal means promoted a "government by rotation," in which no one party ever maintained an extended or strong hold in government.  Consequently, Romania never fully experienced authentic parliamentary democracy despite the liberal democratic structure of its political system.  The crisis of liberalism in Romanian politics contributed to the development of fascist and dictatorial tendencies.  Foreign intervention in Romanian politics by the Western powers further cultivated hyper-nationalism and xenophobia.  In particular, the intervention of Britain, Germany, and France in 1878 in order to enforce the abolition of religious discrimination against Romanian Jews linked the sentiments of nationalism, xenophobia, and anti-Semitism in Romania.

The intellectual roots of Romanian fascist ideology can be traced back to late 19th and early 20th century conservative thinkers such as Mihai Eminescu and A.C. Cuza.  Romanian conservative thought developed out of the social, political, and economic tensions in the 19th century.  The failures of capitalism and liberal democracy in Romanian contributed to the development of proto fascist ideas that greatly influenced Romanian fascist ideology.  The writings of the 19th century Romanian poet Eminescu inspired the development of Romanian fascist hyper-nationalism.  Eminescu protested that 19th century Romania was governed by "French institutions, Jewish business, [and] Austrian industry."  Eminescu expressed the socio-economic frustrations of the petty bourgeoisie by blaming the Romanian Jewish population for the problems of the Romanian nation.  Eminescu asserted the classic fascist "Third Way" reasoning that rejected socialism as a "plaything made of foreign abstraction" and liberalism that had "transformed Romania into a quagmire into which the social sewage of the West and East is discharged."  Eminescu expressed a nostalgic longing for the days of Romanian feudalism which, according to him, was a system of "the greatest freedom, of decentralization, of communal autonomy, of the independence of classes.  Men were not equal and for that very reason they were free."  In the 20th century, the ideas of A.C. Cuza, the intellectual vanguard of the Iron Guard, represented the conservatism that arose from the social tensions of the interwar period.  Cuza's ideas inspired much of the anti-communism and anti-Semitism that was an integral part of Romanian fascist ideology.  Cuza divided Romanian society into three classes, the rural class, the middle class, and the ruling class.  He argued that this hierarchical system unified the nation, "the classes are stages in the development of the same nation . . . consequently, there could never be enmity between the classes."  His critique of communism was based on the idea that "when class struggle enters into a society, it is a dangerous disease which leads the nation toward destruction."  Cuza was also the intellectual architect of modern Romanian anti-Semitism.  Cuza's anti-Semitism was based on the racist theories of Chamberlain and Drumont.  To Cuza, Jews were a "foreign body" and the main source of Romania's socio-economic difficulties.

One of the unique characteristics of Romanian fascism is the incorporation of Orthodox Christianity into the political doctrine and structure of the Iron Guard.  The religious element of Romanian fascism was utilized by the Iron Guard to gain the support of the rural population of Romania where religious beliefs were the strongest.  The Iron Guard used religious themes for most of their propaganda.  The widespread occurrence of "miracles" in Romania during the rise of the Iron Guard represented the utilization of religious propaganda to appeal to the superstitious rural population.  In addition, Romanian fascists made use of collective prayers, religious chants, and processions in order to sway and influence the Romanian people.  Orthodox Christianity was an essential component of Romanian fascist ideology because it was considered one of the most important elements of the "historical continuity" of the Romanian people.  The Iron Guard was initially called the "Legion of the Archangel Michael" because it characterized the predestined character of the legionnaire movement.

HISTORY WILL NOT REPEAT ITSELF IN ROMAN IA. THE COUNTRY IS MUCH MORE INDUSTRIALIZED THAN AFTER WWI. MOREOVER A MUCH LARGER PERCENTAGE OF THE YOUTH ARE RELIGIOUS AND THEREFORE CANNOT BE INFLUENCED BY THE TRADITIONALLY< BUT NOT ENTIRELY aNTISEMITIC CHURCH. THAT DOES NOT MEAN THAT ANTISEMITSM CANNOT GROW AGAIN IN ROMANIA.

[…] The Romanian fascist group known as the Iron Guard used religious iconography and traditional mysticism as a major current in their ideological thought, along with the more conventional fascist themes of anti-communism, anti-Semitism, and nationalism. They incorporated elements of Orthodox Christianity in order to gain support from the rural population. This included claims of miracles occurring during the rise of the Iron Guard as well as collective prayers, chants, and processions. […]