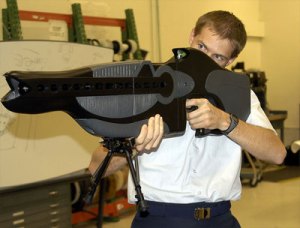 After years of development and testing by defense contractor Raytheon Company and several branches of the military, the notorious Active Denial System, (aka the "pain ray") is being publicly deployed in the United States for the first time.

The National Institute of Justice and Pennsylvania State University are working with Los Angeles county prison officials to install a test unit at Pitchess Detention Center, in Castaic, California. The device, a 7 1/2 foot tall "scaled down" version of the original ADS, uses concentrated beams of electromagnetic radiation to heat water and fat molecules in the body in order to produce unbearable pain and burning sensations in whoever (or whatever) it is directed towards. While Raytheon and the military claim to have tested this weapon system on hundreds of volunteers with thousands of exposures, critics assert that the risks remain high, listing partial thickness burns, eye damage, and the possibility of serious injuries and illnesses for those with piercings and tattoos.

The Active Denial System has had a convoluted history, plagued by lurid rumors of hundreds of animals killed during secret tests. Rumors persist about test deployments to Iraq and Afghanistan, but the military publicly refutes such claims, saying that it had been rejected from being fielded in Iraq due to concerns that it would be seen as a torture device. While the system was indeed deployed to Afghanistan at some point in 2010, it was removed from service this summer. It seems that Raytheon has been looking for a more controlled environment to test their weapon, and they may have found it at Pitchess. According to NBC Los Angeles, there are 3,700 prisoners in the facility, and there have been over 250 "inmate on inmate assaults" so far this year.

A local news station and CNN affiliate, KTLA, recently reported on a riot involving 200 prisoners throwing rocks and debris at guards who were "attempting to stop them from entering a restricted area". According to the report, tear gas and "non-lethal weapons" were used, but even CNN seems unsure as to whether the ADS was used, claiming they are still "awaiting comment on whether the new... device was employed..." This seems to be in keeping with the shady history of the ADS; even the name has been changed repeatedly. First, it was the "Active Denial System". Then, the name was reported to be changing to "Silent Guardian". This most recent incarnation is being referred to as the "Assault Intervention Device".

The "evaluation" at Pitchess is said to be lasting 6 months, at which point the National Institute of Justice will decide whether it is suitable for use in prisons across the country. While an NBC video showed prison guards and officials "zapping" each other with the device amid lots of belly laughs, what will the future of this weapon look like? History has repeatedly shown that as soon as new "less lethal" weapons are widely fielded to law enforcement, they are used to abuse and torture people. Rubber bullets, pepper spray and tasers are all commonly used in ways that directly violate their supposed "safety" guidelines. Roughly one year ago, the Long Range Acoustic Device (aka the "sound cannon") was deployed in the United States for the first time at the mobilization against the G20 in Pittsburgh. While many of those subjected to the LRAD found ways to cope with the intense levels of noise it produced, it's clear that we are entering a new age of crowd control, with sophisticated weapons that can be abused in totally new ways.

Those responsible for deploying this weapon, as well as the mainstream media, suggest that the main function of ADS in the prison system will be to reduce prisoner on prisoner violence. It seems as if it may simply be a new, more efficient way to control prisoners who are revolting against an overcrowded, crumbling penal system. Given the amount of money Raytheon and the government have invested in this weapon, it would hardly be surprising to see it deployed on a national level after this token "evaluation" period.