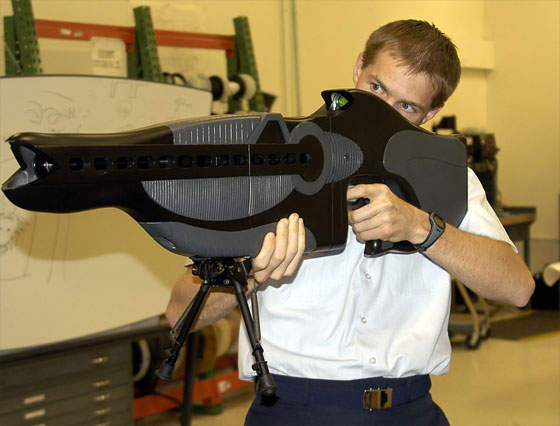 JOINT BASE LANGLEY-EUSTIS, Va. – It cannot be heard, seen or smelled, but those  in its sights will know it by the intolerable heating sensation they feel from  head to toe.

The Joint Non-Lethal Weapons Directorate, from Marine Corps Base Quantico, Va., demonstrated the maritime security application of the Active Denial System, or ADS, at Joint Base Langley-Eustis, Va., Sept.  12.

The technology is a long-range, non-lethal, personnel-deterring  device. The system projects a wavelength, which causes targets to feel an  unbearable heating sensation. The target suffers no lasting effect. Gen.  James Amos, commandant of the Marine Corps, serves as the executive agent of the  Department of Defense’s Non-Lethal Weapons Program and said he is encouraged by  the progress of the Active Denial System.

“I remain committed to ensuring  the Department of Defense’s leadership is aware of the state-of-the-art  technology which is available to the joint force and am bullish about the role  of systems such as ADS and how they may play in future operations,” Amos  said.

The non-lethal technology showcased a few new capabilities on the  murky waters of James River. The demonstration was the first time the system fired from aboard a boat, performed vessel-to-vessel engagement and deterred  human targets aboard hostile moving watercraft.

“The support we had from the Army was awesome,” Lt. Cmdr. Sean Kelly, the experimentation officer with  the NLWD said.

The Army hosted the event and the system was mounted aboard an Army landing craft utility vessel. After launching, the system  engaged targets aboard mock-hostile vessels. Small fishing boats re-enacted  unwanted or accidental behaviors, which threaten the safety of military vessels and every one on board. The technology’s range gives nautical personnel the ability to keep hostile targets at bay without having to lethally engage them  with machine guns or cannons.

The Active Denial System’s potential  applications include ground, aerial and maritime asset protection, hostile crowd control and gives forces the ability to urge targets away from desired positions. Leadership from all branches of the  Department of Defense, Coast Guard and representatives from NATO were present to  see the demonstration and could volunteer to step in front of the beam to experience it first hand.

“The active  denial system creates what can only be described as a very uncomfortable, almost intolerable heating sensation,” Tryon said. “I have been exposed five or six times, and when you are in the beam you cannot stay there long.”

More  than 11,000 subjects encountered the system’s beam throughout the course of its  more than 15-year-long development. During a health brief, visitors who  volunteered to be fired upon learned more facts about the system’s effect on  targets:

• The ADS uses non-ionized radiation, which does not cause the development of skin cancer through short or prolonged exposure.

• The shallow skin  penetration of the 95-gigahertz wavelength only goes about one-sixty fourth of  an inch deep, or about the thickness of three sheets of paper, which has no effect on reproductive organs or unborn children.

• The human intrinsic  reflexes to blink, taking roughly one-fourth of a second, and the behavior to turn the face away from heat protects the eyes from the ADS.

“The DOD  is committed to the advancement of our non-lethal inventory and will continue to promote game-changing scientific achievements such as the Active Denial System,  ” Tryon said. “The long-range, non-lethal effect provided by the Active Denial  System has operational relevance in a wide-range of scenarios and we must strive  to provide our forces with such options in addressing future complex operating  environments.”

The ADS future maritime applications may also include protecting oil rigs, cargo ships or other vessels, which may need to deter hostile actions.  To date, the DOD has built two systems for demonstration.

“In today’s  complex operating environments, we must provide commanders a greater range of  escalation-of-force options to accomplish the mission and reduce civilian casualties and collateral damage,” Amos said.

Previous Article
UK: “I Fought The Nazis – And Now We’ve Voted Them In”
Next Article
From the Archives: Hearing “Voices” – The Hidden History of the CIA’s Electromagnetic Mind Control Experiments

From the Archives: Hearing “Voices” – The Hidden History of the CIA’s Electromagnetic Mind Control Experiments
Sep 18