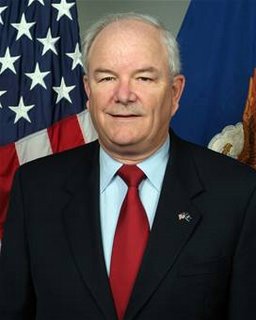 WASHINGTON (AP), September 12, 2006 — Nonlethal weapons such as high-power microwave devices should be used on American citizens in crowd-control situations before being used on the battlefield, the Air Force secretary said Tuesday… The object is basically public relations. Domestic use would make it easier to avoid questions from others about possible safety considerations, said Secretary Michael Wynne. “If we’re not willing to use it here against our fellow citizens, then we should not be willing to use it in a wartime situation,” said Wynne. “(Because) if I hit somebody with a nonlethal weapon and they claim that it injured them in a way that was not intended, I think that I would be vilified in the world press.” The Air Force has paid for research into nonlethal weapons, but he said the service is unlikely to spend more money on development until injury problems are reviewed by medical experts and resolved. Nonlethal weapons generally can weaken people if they are hit with the beam. Some of the weapons can emit short, intense energy pulses that also can be effective in disabling some electronic devices…. ——————- AIR FORCE SECRETARY MICHAEL W. WYNNE BIOGRAPHY http://www.af.mil/bios/bio.asp? bioID=7919 Mr. Wynne graduated from the U.S. Military Academy and served in the Air Force for seven years, ending his career as a captain and assistant professor of astronautics at the U.S. Air Force Academy. He spent three years with Lockheed Martin selling the Space Systems Division to then Martin Marietta. He successfully integrated the division into the Astronautics Company and became the General Manager of the Space Launch Systems segment, combining the Titan with the Atlas Launch vehicles. For the next 23 years, Mr. Wynne held a variety of senior positions at General Dynamics, retiring in 1999 as Senior Vice President where his role was in International Development and Strategy. Throughout his career at General Dynamics, he held positions with the Aircraft (F-16s), Main Battle Tanks (M1A2), and Space Launch Vehicles (Atlas and Centaur) Divisions. Prior to joining the Bush Administration, Mr. Wynne was involved in venture capital. He nurtured small technology companies through their startup phase as a member of the NextGenFund Executive Committee, and served in executive positions of two of those companies.

Previous Article
Has Comair been Targetted?
Next Article
The Mark Foley Coverup Timeline