Abdelbaset al-Megrahi, the only man convicted of the Lockerbie bombing, has blamed the SNP for his decision to drop his second appeal against conviction days before he was freed on compassionate grounds. 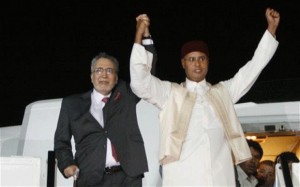 Megrahi is welcomed on his return to Tripoli by Saif al-Islam, Col Gaddafi’s son Photo: AP

Megrahi abandoned the appeal that could have cleared his name before being released by Kenny MacAskill, the Justice Minister, and allowed to return to his family in Tripoli. There was no legal reason to do so and the move was a huge disappointment to relatives of the victims who hoped the appeal would bring them closer to the truth.

However, ministers repeatedly insisted at the time that it was entirely the Libyan’s decision, and was not part of any deal.

Megrahi, 59, makes the damaging claim against Alex Salmond’s administration in a new book that tells the story of his “politically motivated wrongful  conviction” and “puts the Scottish criminal justice system in the dock”. The implication is that the appeal would have proved embarrassing to the Scottish justice system by revealing that he was the innocent victim of dirty politics and a flawed investigation.

Opposition parties in Scotland said the claim was “staggering” and demanded a statement in the Scottish Parliament from the Justice Minister.

Ruth Davidson, leader of the Scottish Conservatives, said that if Mr MacAskill had been withholding information it called his position into   question.

A spokesman for David Cameron, the Prime Minister, said the book was another reminder that “Alex Salmond’s government’s decision to free the UK’s greatest mass murderer was wrong”. He added: “Writing a book three years after he was released is an insult to the families of the 270 people who were murdered.”

Megrahi, who is dying from prostate cancer, says in his own words in “Megrahi You are My Jury – The Lockerbie Evidence”, that Mr MacAskill met Libyan officials, including a minister named al-Obedi, on August 10, 2009, ten days before he was released. He claims that after the meeting the Libyan delegation came to see him in prison in Greenock, adding: “Obedi said that, towards the end of the meeting, MacAskill had asked to speak to him in private.

“Once the others had withdrawn, he stated that MacAskill gave him to understand that it would be easier to grant compassionate release if I   dropped my appeal. He said he was not demanding that I do so, but the message seemed to me to be clear. I was legally entitled to continue the appeal, but I could not risk doing so. It meant abandoning my quest for justice.” He says that it was with “huge reluctance and sadness” that he broke the news to his lawyer Tony Kelly the following day.

“He was utterly shocked and reiterated that I had a legal right to continue, but my mind was made up,” he writes. “He dejectedly drove to   Edinburgh for what was supposed to be a routine meeting with counsel and broke the news to them.”

Megrahi was subsequently freed on August 20 and allowed to return to his family in Tripoli on the basis that he was terminally ill and had just three months to live.

American relatives of the victims, who accepted the original guilty verdict, have repeatedly claimed that the fact he is still alive today suggests he   was freed because of British oil deals in Libya. There were also claims, strongly denied at the time, that Mr Salmond’s administration was under pressure from Westminster.

But Mr MacAskill denied there was any interference from the Labour Government and dismissed suggestions that Megrahi had been asked to drop his appeal. At one point he said: “There’s loads of stories about Megrahi. There’s a veritable industry out there as there is about whether Elvis Presley is alive and working in some chip shop in Fife. A note of the meeting is on the government website and I never at any stage have suggested to him that he should drop his appeal.”

During the international furore that followed Megrahi’s release, Oliver Miles, the former British ambassador in Tripoli, said: “I don’t understand why Megrahi gave up his appeal. He has always asserted his innocence. So why did he give it up? I’ve a nasty feeling he did it because somebody tipped him the wink that he was more likely to get humanitarian release if he gave it up.”

Around 60 per cent of the new book by John Ashton, who was a researcher for Megrahi’s legal team, is in the alleged bomber’s own words. According to the author, it “destroys” the case against Megrahi and proves that he was framed for the murder. It states that potentially crucial evidence was withheld by the Crown Office from the original defence team at Megrahi’s trial and reveals “crucial new evidence” which it says removes the “golden thread” linking the Libyan to the bombing.

The judges at the trial accepted that a tiny fragment of electronic printed circuit board recovered from the wreckage was from the timer in the bomb that blew up Pan Am Flight 103, killing 270 people. The timer was made for the Swiss company Mebo by another company called Thuring, to fulfil an order from the Libyan government in the 1980s.

But Mr Ashton claims that if Megrahi’s appeal had been allowed to go ahead, it would have shown that new evidence proves the circuit board contained pure tin, while all the Thuring boards were made from an alloy of tin and lead.

Megrahi also claims in the book that the ultimate responsibility for his imprisonment lies with the three Scottish judges who heard his case at a special court in Holland. He says Lords Sutherland, Coulsfield and MacLean knew that an acquittal would have brought “numerous powerful institutions into very serious disrepute”.

He adds: “It would have meant that the largest criminal inquiry in British and American history had snared the wrong people; it would mean that the gaping holes in the police investigation and the Crown case would be open to public scrutiny; it would mean that the UN Security Council had passed resolutions on a false basis that resulted in years of suffering for the Libyan people; and it would be an acknowledgement that the real bombers remained untouched.”

Mr Ashton and Dr Jim Swire, who lost his daughter in the atrocity, called following the launch of the book in Edinburgh for a new appeal and a full   inquiry. Dr Swire, who last saw Megrahi in December, said he believed he did not have long to live.

Previous Article
A Material Girl: The Duchess of Windsor & the Swastika
Next Article
American Eugenics and the Nazi Connection (Jerusalem Post)