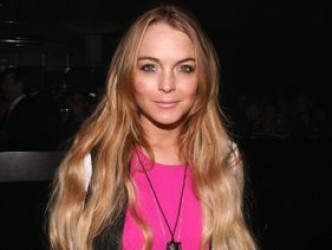 A high-brow pundit weighs in today on coverage of the ongoing Republican convention:

Lohan blogs that the "real problem" stems "from the fact that we are taking the focus off of getting to know Sarah Palin and her political views, and what she can do to make our country a less destructive place."

One of the issues that might be discussed at the convention relates to Ms. Lohan and 9/11, but remains largely ignored, like Palin's "political views," by the corporate media:

An uncle of actress Lindsay Lohan was sentenced yesterday to a year and a day in federal prison and ordered to repay a $646,000 government agency loan after he falsely claimed his company lost business as a result of the World Trade Center's destruction.

In addition to fraud, Paul Sullivan, 50, of Old Bethpage was also accused of obstruction of justice.

U.S. District Judge Joanna Seybert at the federal court in Central Islip sentenced Sullivan to less than the minimum 27 months suggested by federal sentencing guidelines, saying she was trying to arrive at a balance.

Seybert said she had weighed "the highly egregious nature" of Sullivan's taking advantage of 9/11 tragedy against the pain the arrest already had caused Sullivan, his wife, three children and mother, and the fact that many cases of Small Business Administration frauds are settled civilly.

Sullivan's lawyer, Joseph Conway of Garden City, argued before sentencing that while his client was a college graduate, he had a difficult time finding work after his arrest in 2005 and had been receiving public assistance, occasionally being employed as a security guard.

Conway said the SBA loan was not used to support "a lavish lifestyle" or to buy drugs, but unsuccessfully to try to keep Sullivan's business afloat.

"Since my arrest it has been extremely stressful both personally and financially," Sullivan said. "The sadness and despair in my mother's eyes is worse than any jail cell you may put me in."

Sullivan is not the only one of Lohan's relatives to have been in trouble with the law. Her father, Michael Lohan, has served jail time for harassing Sullivan, the brother of Dina Lohan, Lindsay's mother, and assaulting Sullivan's brother Matthew, also an uncle of the actress.

Lindsay wants the country to be a "less destructive place?' She might start with her own family ...