"... Pete Peterson has dedicated his life and his fortune to ending social security and medicare as we know it. ... The 'partnership' of his Fiscal Times with ostensibly objective independent news organizations like CNN and the Washington Post calls into question the ethical standards of these news organizations. ..."

Posted by AzBlueMeanie | Blog of Arizona: 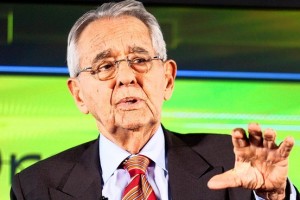 In coming weeks you are going to see the name of Pete Peterson pop up frequently in news reports, but the reporting will not contain a disclaimer identifying whom he and the think tanks he funds are nor what his relationship is to the news organization. I warned you about this back in April, Republicans resurrect "welfare" charge for Tax Day: More GOP Tax Day Lies:

You need to maintain a wary eye for any reporting by the Washington Post or its stable of conservative syndicated columnists (David Broder, George Will, Charles Krauthammer, Michael Gerson, Richard Cohen, Robert Kagan, Robert Samuelson, Kathleen Parker, etc.) on the Obama Deficit Commission or the separate Peterson-Pew Commission (a partnership of the Peter G. Peterson Foundation, the Pew Charitable Trusts and the Committee for a Responsible Federal Budget). Bipartisan commission proposes strict budget rules to stabilize U.S. debt. (Post reporting and syndicated columnists fequently appear in The Arizona Republic and the Arizona Daily Star, so beware).

Which makes this report by Dan Eggen in the Washington Post all the more interesting, Many deficit commission staffers paid by outside groups:

[T]he National Commission on Fiscal Responsibility and Reform has also come under attack for its unusual approach to staffing: Many of its employees aren't employed by the panel at all.

Instead, about one in four commission staffers is paid by outside entities, many of which have strong ideological points of view about how to tackle the deficit.

For example, the salaries of two senior staffers, Marc Goldwein and Ed Lorenzen, are paid by private groups that have previously advocated cuts to entitlement programs. Lorenzen is paid by the Peter G. Peterson Foundation, while Goldwein is paid by the Committee for a Responsible Federal Budget, which is also partly funded by the Peterson group.

The outsourcing has come under sharp criticism from seniors' organizations and liberal activists, who say the strategy is part of a broader conservative bias favoring painful entitlement cuts over other solutions. The fears of some liberal groups appeared to come true on Wednesday, when the commission's two leaders recommended significant reductions for Social Security and other social-welfare programs.

Other staffers paid by outside entities include an analyst from the liberal-leaning Economic Policy Institute and a Clinton administration official who now teaches at Johns Hopkins University[.]

But Barbara B. Kennelly, a former Democratic House member from Connecticut who heads the National Committee to Preserve Social Security and Medicare, said the commission's staffing structure is "unprecedented" and casts further doubt on its fairness.

"Taxpayers fund the commission and they should work independently of Washington lobbyists and power brokers," Kennelly said. "This is the type of shenanigans that average Americans are so upset about right now - that money talks and everyone else is left out."

Kennelly and other liberal-leaning critics say they are particularly troubled by the influence of Peterson, a billionaire and former investment banker who began a $6 million campaign this week urging lawmakers to cut the deficit. Peterson, co-founder of the Blackstone Group investment fund, paid for a series of town hall meetings this year that included participation by deficit commission members. He also funds the Fiscal Times, a digital news organization that focuses on federal debt issues.

Peterson representatives say the views and goals of his organizations have been distorted.

Bullshit. Pete Peterson has dedicated his life and his fortune to ending social security and medicare as we know it. Pete Peterson’s Anti-Entitlement Juggernaut. He has been pursuing this goal for decades. The "partnership" of his Fiscal Times with ostensibly objective independent news organizations like CNN and the Washington Post calls into question the ethical standards of these news organizations.

The media villagers and Beltway bloviators, all of whom are among the "two percenters" privileged elite, speak favorably of tax cuts for the rich and corporations, and of the need to cut back on the social safety net of social security and medicare. Their financial self-interest informs their views. Most, with few exceptions, do not have the best interests of average Americans at heart.

Charles Koch is a Past Member of the John Birch Society