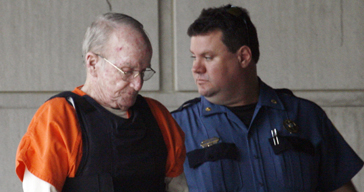 JACKSON, Miss. (AP) — James Ford Seale, a reputed Ku Klux Klansman, was sentenced Friday to three life terms in prison for his role in the 1964 abduction and murder of two black teenagers in southwest Mississippi.

Mr. Seale, 72, was convicted in June on federal charges of kidnapping and conspiracy in the deaths of Charles Moore and Henry Hezekiah Dee, two 19-year-olds who disappeared from Franklin County on May 2, 1964.

The young men's bodies were found two months later in the Mississippi River.

Judge Wingate told Mr. Seale the crimes committed 43 years ago were “horrific” and “justice itself is ageless.”

He denied a defence motion to allow Mr. Seale to be free on bond while his case is appealed.

During the hearing, one of Mr. Dee's sisters and Mr. Moore's brother talked about how the violent deaths affected them and their families.

“I don't have no hate in my heart but I'm happy for justice,” said Mr. Dee's sister Thelma Collins of Springfield, La.

“I hope you perhaps spend the rest of your natural life in prison thinking of what you did to Charles Moore and Henry Dee and how you ran for a long time but you got caught,” he said. “I hope the spirit of Charles and Henry come to your cell every night and visit with you to teach you what it meant
by love of your fellow man.”

Both of them stood about three metres from Mr. Seale, but he never made eye contact with them. When asked by Judge Wingate if he had anything to day, Mr. Seale, who wore an orange jail jumpsuit and was shackled at his waist and ankles, stood, shook his head and said “No.” Judge Wingate agreed to assign Mr. Seale to a prison where his health needs can be met. He has cancer, bone spurs and other health problems.

The prosecution's star witness against Mr. Seale was Charles Marcus Edwards, a confessed Klansman who received immunity from prosecution for his admitted role in the abductions and his testimony.

He testified that Mr. Seale and other Klansmen abducted Mr. Dee and Mr. Moore near Meadville, forced them into the trunk of Seale's Volkswagen and drove them to a farm. The two were later tied up and driven across the
Mississippi River into Louisiana.

Mr. Edwards said Mr. Seale told him that heavy weights were attached to the teenagers and they were then dumped alive into the river.

Mr. Seale was arrested on a state murder charge in 1964, but the charge was later dropped. Federal prosecutors say the state charges were dropped because local law enforcement officers in 1964 were in collusion with the
Klan.