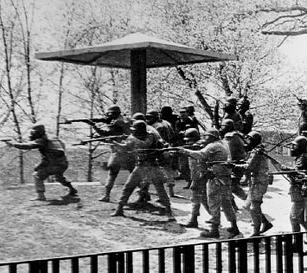 KENT, Ohio (AP) —  Seven people wounded by Ohio National Guard gunfire at Kent State University 42 years ago Friday have renewed an appeal for answers to lingering questions, such as whether an order to fire was given.

"Our May 4 movement for truth and justice has continued for 42 years, and we will not desist until truth about this government crime is acknowledged by our government," the group said Thursday on the eve of the anniversary of the shooting, which killed four people and helped galvanize opposition to the Vietnam War.

The survivors are launching a campaign to persuade state and federal lawmakers and other officials to convene hearings to examine new evidence from the May 4, 1970, shootings.

"We have undeniable, verifiable, digital, forensic, recorded evidence proving a shouted military command ending with the word `FIRE!' preceded the barrage of 67 deadly gunshots fired by the Ohio National Guard on this campus," the statement by survivors said.

Backers of a renewed investigation said a 2010 analysis of a recently enhanced audio recording concluded that someone may have ordered troops to prepare to fire during the campus protest. But the federal government said its review was inconclusive in determining whether the recording provided such evidence.

Assistant Attorney General Thomas Perez said last month on the issue of a command to fire that the government's analyst showed "no military-like voice commands to fire or otherwise were heard; rather, many of the words heard were probably uttered by several different individuals located closer to the microphone."

The original reel-to-reel audio recording was made by Terry Strubbe, a student who placed a microphone in a window sill of his dormitory overlooking the anti-war rally. A copy of the audio tape was found in a library archive in 2007.

The survivors asked Gov. John Kasich and Ohio Attorney General Mike DeWine to clear the way for an analysis of the tape by state crime laboratory investigators.

The governor's office referred the matter to DeWine, who said Friday there was no ongoing investigation but added that he would look at any new evidence.

Dean Kahler, who was shot in the spine and paralyzed from the waist down, joined other survivors on campus Thursday and said it's important to get the truth out.

The Far-Right Is Calling For Assassination of Democrat-Appointed Judges