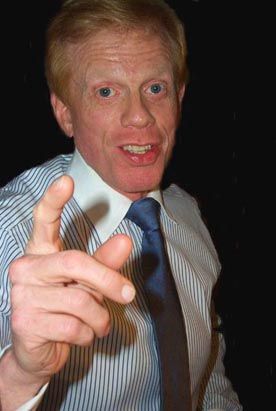 COEUR D'ALENE, Idaho -- A federal judge ordered former Aryan Nations attorney Edgar Steele, who's accused of hiring a hitman to kill his wife,  to stay in jail until his trial starts.  Steele said the murder for hire charge is "one giant plot against me" during his detention hearing on Tuesday in the U.S. Federal Courthouse in Coeur d'Alene.

Steele was represented by attorney Roger Pevan in the hearing that determined whether he will remain in jail until his trial.

During the hearing Tuesday, a portion of an audio tape was played in court of a conversation from jail on June 13th between Steele and his son, Rex, and his wife, Cyndi. Prosecutors said Steele is heard telling his wife and son that two recorded phone conversations between Steele and the alleged hitman, Larry Fairfax, do not contain Steele's voice and he denied plotting to kill his wife.  Steele claimed in the call from jail that it's all "one giant plot against me."

Steele was arrested June 12 in Sagle, ID. According to the FBI, it was the same day the hit was supposed to take place.

Investigators with the FBI told KREM 2 News Steele paid Fairfax $500 up front for the hit on his wife and mother-in-law, and told them he would pay another $100,000 if the insurance settlement came through. The FBI says the plan was to make the hit "look like an accident."

Both women were located in Oregon City, Oregon, where Steele's wife was visiting her sick mother. The FBI believes Steele may have been planning the hit for 6 months.

Steele is not seperated from his wife. 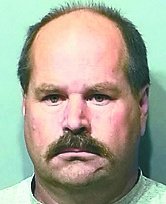 A suspected hitman-turned-informant who federal investigators say didn’t tell them he’d already planted a bomb on the car of a murder-plot target was ordered held without bail on Monday.

U.S Magistrate Candy Dale called her decision to keep Larry A. Fairfax, 49, behind bars “very difficult” but said he was a danger to the community.

The Sagle, Idaho, man has been in jail since June 11 after auto shop employees found a pipe bomb attached to a car brought in by Edgar Steele’s wife, Cyndi Steele. Fairfax had told investigators the week before that he’d been hired by Steele to kill Steele’s wife and mother-in-law but didn’t tell investigators about the pipe bomb, federal agents testified on Monday.

The hearing included testimony from Fairfax’s 26-year-old son, his wife of 31 years, and a retired judge and lawyer who called Fairfax “about the hardest working guy I know.”

Dale said Fairfax didn’t appear to be a flight risk but questioned the community’s safety if he was free, noting he didn’t tell his wife about the plot and didn’t mention $10,000 in silver coins Steele gave him when he accepted the job. Fairfax said he traveled to Oregon to make sure the pipe bomb was off Cyndi Steele’s car. But he told his wife he was just checking to see if Cyndi Steele was seeing another man, as he claimed Edgar Steele suspected, according to court testimony.

Dale said she had concerns there may be “other matters that Mr. Fairfax has not shared.”

Fairfax, who has no criminal history, faces two felony charges related to the explosive.

Fairfax said he’d placed the bomb under the car May 30 but rigged it so it didn’t explode.

“The fact of the matter is this defendant stopped a murder,” said John Miller, Fairfax’s public defender.

Edgar Steele, known for his unsuccessful defense of the Aryan Nations in a lawsuit that bankrupted the group, is in custody at the Spokane County Jail; he’s due in court this morning for a hearing to determine if he’ll remain there without bail.

The case began June 9 when Fairfax told FBI Special Agent Mike Sotka he’d been hired by Steele, whom he said he’d known for 20 years, to kill Steele’s wife and mother-in-law. He said he’d already been paid $10,000 in silver coins, received $400 for travel expenses to Oregon, where Steele’s mother-in-law lives, and was to receive $25,000 for the murders, then $100,000 if an auto insurance claim paid off.

The FBI covertly monitored two meetings between Fairfax and Steele, then raided Steele’s home on Talache Road, about 10 miles southeast of Sandpoint, on June 11. Steele pleaded not guilty June 15 to use of interstate commerce for the commission of murder for hire.

Fairfax was not facing a criminal investigation until the pipe bomb was discovered.

Assistant U.S. Attorney Traci Whelan said the device “had all the components that are needed for a bomb to go off.”

“He took a gamble,” Whelan said. “He created a tremendous risk not only to Mrs. Steele but to the entire community.”

Miller said his client thought the bomb was off the car.

“I don’t think we need to punish him for not telling the whole story when the device didn’t explode,” Miller said.

Sotka and Todd Smith, a federal agent with the Bureau of Alcohol, Tobacco, Firearms and Explosives, told the judge the plot likely would not have been uncovered had it not been for Fairfax. But they questioned Fairfax’s assertion that placing tape over the pipe bomb’s fuse would keep it from exploding.

A Spokane County bomb technician called the 12-inch bomb “one of the biggest pipe bombs that he could remember, and they deal with this more frequently than we would like,” Smith said.

Smith said he’s investigated two homicides by pipe bomb, “and they were nowhere near as large as this pipe bomb.”