Edgar Steele, Attorney for Aryan Nations, Is Rejected by Constitution Party of Idaho 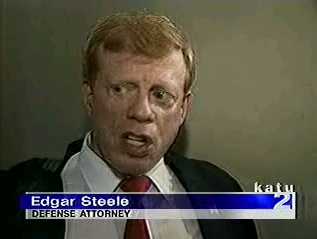 Edgar Steele is an attorney who has represented various racist groups and white supremacists in court. His claim to fame amongst that community is that he defended the Aryan Nations in the lawsuit that eventually put them under. Apparently Edgar Steele has political ambitions, too.

“I have defended and provide legal advice to probably more of the politically incorrect than has any other attorney in America today,” Steele said in a May 2009 essay available on his website. “Always, I have required that they be fundamentally decent people … and always they must be innocent, regardless of how things might eventually turn out in court.”

His last speaking engagement was at a militia and Constitution convention in Georgia called the Jekyll Island Project in May 2009, but he “was a bit of an oddball in the sense that he was the only serious racist and anti-Semite,” said Berich, of the Southern Poverty Law Center.

Steele’s online writings say he planned to run for governor of Idaho in 2010 but was angry with the Constitution Party for rejecting him.

“He sort of progressively got angrier and more anti-Semitic over time,” Berich said. “I don’t know if he was starting to go off the rails with all this hatred. It seems like he was on a slippery, downhill slope after losing the trial.”

The Chairman of the Constitution Party of Idaho apparently rejected Mr. Steele’s membership application. Mr. Steele rants about the rejection here. Mr. Steele suggests that Venable rejected his application because Venable is African-American.