Juan Antonio Samaranch – The Great Whitewash of a Francoist Fascist

" ... few pay very much attention to the man’s hideous politics as a dyed-in-the-wool supporter of Spanish dictator General Francisco Franco and a member of his totally undemocratic and unelected parliament. The whitewash extends into the highest levels of his native Catalonia whose language and culture were brutally crushed under Franco. ... " 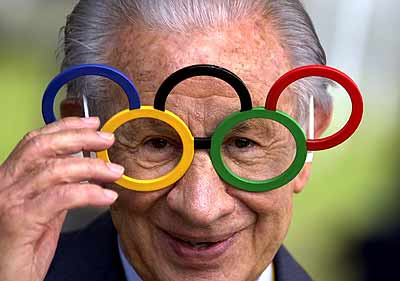 Juan Antonio Samaranch, the man who transformed the Olympic Games has died and the world stands in salute to praise him.

‘After de Coubertin, there is no question that Samaranch stands head and shoulders above the other presidents in terms of his impact,’ fawns Olympic historian John MacAloon.

‘A man that challenged us all to fight for sport, its primacy and its autonomy, a fight he led fearlessly from the front, creating an extraordinary sporting movement that reaches millions of people around the world,’ croons Lord Coe. No surprise there. Samaranch awarded the Games to London and Coe is now the man running them.

Quite a few of today’s obituaries remark on the rise of corruption and doping that stained the Games under his watch.

But very few pay very much attention to the man’s hideous politics as a dyed-in-the-wool supporter of Spanish dictator General Francisco Franco and a member of his totally undemocratic and unelected parliament.

The whitewash extends into the highest levels of his native Catalonia whose language and culture were brutally crushed under Franco. There, the vice president Josep-Lluís Carod-Rovira described him today as ‘the most important Catalan in the world of sport and the Olympics’. Carod-Rovira, it should be noted, leads a party dedicated to Catalonia’s independence from the Spanish state that Franco held so sacred. It is, as they say, a funny old world. But the evidence is clear in pictures and audio, as the website directe.cat points out today in an article entitled 'Samaranch's posthumous victory.'

Go there and see the photo (left) of Samaranch at Barcelona’s Arc de Triomf. This was taken in 1974 on the 38th anniversary of Franco's military coup. Note the arms raised in fascist salute. There are also other pictures of him taking the fascist oath and addressing a meeting in the regime’s blue shirt.

And lo, there is also an audio clip recorded after Franco’s death in which Samaranch claimed that the dictator’s mandate 'represented one of the most brilliant periods in the history of Spain, certainly'.

This, I might remind you, was a regime under which thousands of political opponents were tortured and often killed. They’re still digging up the mass graves of many of the victims.

The schizophrenia felt by the Spanish political classes is a symptom of how that country transmogrified from fascism to democracy in the blink of an eye without bothering to bring the culpable and the collaborators to justice. That’s their problem. The rest of the world however has no such excuse and should be more even handed in the way it remembers a thoroughly nasty character.