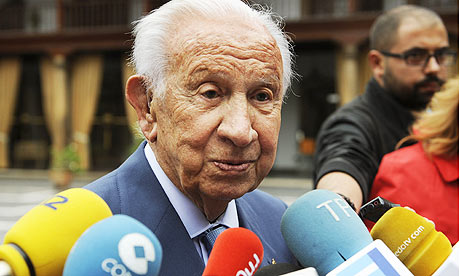 With his 1995 pronouncement that the 2002 Winter Olympics would take place in Salt Lake City, Juan Antonio Samaranch elevated Utah to an unprecedented position of prominence on the world stage.

But that lofty perch also meant the city and the International Olympic Committee president would be held to high standards. And both were stung deeply 4½ years later when allegations surfaced that the host city selection process overseen by Samaranch was corrupt.

The ensuing Olympic bribery scandal will forever link Salt Lake City and Samaranch, who died Wednesday in his home town of Barcelona, Spain. He was 89.

Starting with a leaked letter that revealed the Salt Lake Olympic bid and organizing committees were putting an IOC member's daughter through college in Washington, D.C., the scandal led to the ouster of 10 IOC members, forced Samaranch to defend himself and the organization before Congress, and resulted in an overhaul of the host city-selection process, eliminating the members' biggest perk -- the chance to visit bid cities around the world.

It also reshaped the top of the Salt Lake Organizing Committee (SLOC), ushering out longtime leaders Frank Joklik and Dave Johnson and replacing them with Mitt Romney and Fraser Bullock. The ultimate success of the Salt Lake Olympics, which Samaranch said he never doubted, would help propel Romney into the national spotlight where he remains today as a potential presidential candidate in 2012.

But Samaranch's influence on the world of sports extends far beyond the bribery scandal, said Tom Welch, the driving force behind Salt Lake City's bid.

"There is a lot of participation in sports today, and at a higher level in countries around the world, because of the growth he brought to the Olympic movement," said Welch, who along with Johnson faced federal bribery and fraud charges until U.S. District Judge David Sam found them innocent and threw the case out of court in 2004.

"Samaranch envisioned the way to create finances that brought countries into the Games that never participated before. He was able to keep under the tent some very strong sports unions, such as soccer, that are as popular throughout the world as the Olympic movement," he added. "He was a very skillful negotiator and certainly the most powerful personality that ever touched the Olympic movement."

When Welch first met Samaranch, the reception he got was cool.

It was July 4, 1989, and Samaranch had been IOC president for nearly a decade. A deputy sports minister in the government of Spanish dictator Francisco Franco and an IOC member since 1963, he had built the organization up after the Munich massacre of 1972, boycotts in 1976, 1980 and 1984 and the financial debacle of Montreal (1976).

And he had not forgotten the embarrassment of Denver giving up its chance to stage the 1976 Winter Games.

"He was less than enthusiastic toward any U.S. city because of the experience in Denver," said Welch, who eventually won over Samaranch with his depiction of how Utah voters approved a referendum pledging state tax revenues to build Olympic facilities before the city knew whether it would be selected to host the Games.

"That was the start of a long relationship," Welch said, adding, "the relationship was never consistent. [Samaranch] sat on top of a jagged peak because there were great pressures on him from all angles."

By leveling that playing field, Welch said, he made the Olympics more appealing to broadcasters around the world, generating millions and millions of dollars in revenue. To increase the universal appeal of the Games, he also set up financial mechanisms to redistribute some of that wealth so smaller, poorer countries could compete.

In doing so, Samaranch also brought into the IOC a number of people from those outside lands whose cultures were not as averse to gift-giving as those of Western countries. And they had opportunities to influence the outcome of bid-city votes, as Welch and other Salt Lake City officials discovered when they were upset by Nagano in the bid for the 1998 Winter Olympics.

When Samaranch did nothing about their complaints about excessive gift-giving by the Japanese in that election, the Salt Lake City team determined that to win, it had to play by the unofficial rules permitted by the IOC.

That night, Welch said, "I made [Samaranch] a promise that Salt Lake would be the greatest Winter Games. I think they were."

By then, Welch was on the sidelines, pushed out of SLOC in 1997 after a domestic violence incident with his wife. Samaranch was still involved in the IOC, but in a much diminished capacity.

He had survived the ravages of the bribery scandal, receiving an overwhelming vote of support from the IOC membership after 10 members were ousted and ushering in sweeping reforms with the aid of big names such as former U.S. Secretary of State Henry Kissinger.

But the public relations beating he had taken had hurt the man often derided as "His Excellency," and Samaranch was conspicuously offstage when the 2002 Games unfolded.

Still, former Gov. Mike Leavitt said Wednesday, "Juan Antonio Samaranch was a friend to Utah. He believed in our capacity to successfully host the 2002 Olympic Games and was a good partner. His imprint will always remain on Utah and our Olympic legacy."