Holocaust » 'Old Lady' Stadium with a Nazi Past

'Old Lady' Stadium with a Nazi Past

Ernst Happel Stadium in Leopoldstadt, the 2nd district of Vienna, known as the Prater Stadium (Praterstadion) prior to 1992. The stadium was renamed in honour of Ernst Happel following his death in 1992. It will host the Euro 2008 final on 29 June. For more, see: http://www.worldsportsarenas.com/

VIENNA (AFP) — It may be called rather fetchingly the 'Old Lady' but the stadium for Sunday's Euro 2008 final between Germany and Spain has a dark past - it was formerly a site for Nazi propaganda and racial experiments.

The Ernst Happel stadium, originally named Prater stadium after the area of Vienna in which it is located, opened in 1931 for the second Workers' Olympiad after 23 months of construction. A "utopia made of steel, glass and concrete," the sleek structure by German architect Otto Ernst Schweizer was then considered the most modern stadium in Europe. 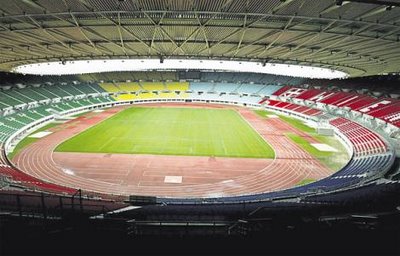 The venue, which was home to the celebrated Austrian Wunderteam of the 1930s, originally held 60,000. It was later increased to 90,000 in the 1950s, before standing places were abolished.

Renovated in 1986, the stadium was renamed after legendary Austrian coach Ernst Happel in 1993 and is now a protected landmark. The "Old Lady," which underwent further restoration in preparation for the Euro at a cost of 36.9 million euros (58.2 million dollars), also served a more sinister purpose during the 1930s.

On May 1, 1934, marching schoolchildren paid tribute to Austro-fascist Chancellor Engelbert Dolfuss at the stadium, in a pompous Labour Day spectacle during which he proclaimed a new constitution, effectively turning Austria into an authoritarian state.

Four years later, on April 3, 1938, the stadium hosted the so-called Anschluss Spiel, or "annexation match," following Austria's occupation by Adolf Hitler's Germany on March 12. Staged by Nazi propagandists as a reconciliation between two parts of the Reich that belonged together, the game - one week before an April 10 referendum, in which Austrians would overwhelmingly vote to join the Third Reich - nevertheless saw Austria defeat Germany 2-0, before an array of Nazi high officials.

A year later on September 10-11, 1939, the stadium took on a new role as the German Gestapo locked up over 1,000 Jewish men there on the grounds that the prisons were full.

Josef Wastl, the then-director of the anthropology department at Vienna's Natural History Museum, examined some 440 detainees, taking measurements of their bodies and features for an "Anthropology of Jews" report, with photos, hair samples and plaster masks of their faces. The prisoners were sent to Buchenwald concentration camp on September 30 and business resumed as usual on the following day, as the stadium once again played host to a football game.

Sports: The Sudden Death of Matthias Sindelar in Nazi-Occupied Austria

Juan Antonio Samaranch: The Great Whitewash of a Francoist Fascist