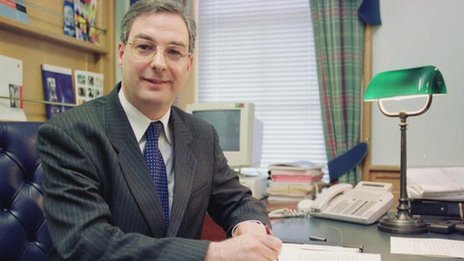 Photo: Colin Boyd was Scotland’s lord advocate for almost a decade, until 2006

” … Allegations strike at the very heart of the Lockerbie investigation past and present. … “

Scotland’s former chief prosecutor Lord Boyd has been accused by campaigners for the Lockerbie bomber of attempting to pervert the course of justice.

Justice for Megrahi (JFM) also claim police, forensic scientists and Crown Office personnel broke the law. The Scottish government said JFM should send any evidence to Dumfries and Galloway police which carried out the original investigation into Lockerbie.

Abdelbaset al-Megrahi is the only man convicted of the 1988 atrocity.

Three judges heard the evidence without a jury at a special court in the Netherlands in 2001, when Lord Boyd was lord advocate. They sentenced Megrahi to life imprisonment for the murder of the 270 people who died when Pan Am 103 was blown up over the Scottish town.

Megrahi died in May this year of inoperable prostate cancer. The convicted bomber had abandoned a second appeal against his conviction in 2009 shortly being sent from a Scottish prison to Libya on compassionate grounds. But campaigners, who want Megrahi’s conviction overturned, have kept up their demands for a public inquiry into the investigation and prosecution of the Lockerbie case.

On Tuesday, JFM published a letter it had sent to Scotland’s Justice Secretary Kenny MacAskill detailing its complaints about the legal process. It claimed the lord advocate at the time, Lord Boyd, who led the Lockerbie prosecution, gave information to the trial judges which members of his team knew to be false. It concerned the contents of American CIA cables relating to the prosecution witness, Abdul Majid Giaka.

In its letter, JFM said: “It is submitted this constituted an attempt to pervert the course of justice.” It makes similar claims about members of the prosecution team at the trial at Kamp Zeist in the Netherlands, and about police and forensic officers.

JFM said its allegations “strike at the very heart of the Lockerbie investigation past and present”. It said it had documents of supporting material – but gave no details. The campaign group repeated its call for an independent inquiry to be held by someone outwith Scotland. Mr MacAskill has not replied to the letter, but asked Neil Rennick, deputy director of the Scottish government’s justice directorate to do so.

Mr Rennick repeated the government’s view that only a court had the power to uphold or overturn Megrahi’s conviction. He said: “Scottish ministers take exceptionally seriously any suggestion of inappropriate or criminal activity by individuals with key responsibilities with Scotland’s justice system.

“Such allegations should be reported and investigated through the appropriate procedures.”

He said it was not for the government to investigate allegations of criminality; it was for the lord advocate who is independent of government.

Mr Rennick told JFM it should provide evidence of its allegations to Dumfries and Galloway Constabulary which carried out the Lockerbie investigation. Lord Boyd, who is now a judge, has made no comment. But the Crown Office said it considered the allegations to be defamatory. It added: “These allegations have been addressed and rejected in a combination of court hearings, an inquiry by Lothian and Borders police and the investigation by the Scottish Criminal Cases Review Commission (SCCRC).

“The SCCRC was satisfied after full and proper investigation that there was no basis for concluding that evidence in the case was fabricated by the police, the Crown, forensic scientists or any other representatives of official bodies or government agencies.”