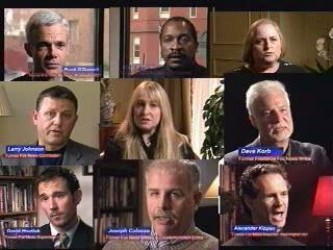 I guess it should really be no surprise as we approach the 25th anniversary of the real 1984 that Orwellian "newspeak" has become the norm for at least some media outlets, and yet I was continually confronted with a major pit in my stomach as I watched this new, updated DVD release of the 2004 documentary Outfoxed, an admittedly left leaning expose of Rupert Murdoch's purported "news" organization. Fox News' conservative proclivities are certainly not a big secret, and weren't even back during the Kerry vs. Bush imbroglio, but seeing example after example of blatant factual inaccuracy, always in favor of the Republican and/or Bush agendas, to the detriment of anything "liberal" or "progressive," makes Fox's slogan "fair and balanced" about as meaningful as Orwell's "War is Peace."

Anyone even routinely tuning into any of the many popular conservative commentators (chief among them Rush Limbaugh, of course) will be aware that the alleged "liberal media bias" of major news networks is a recurring theme of their daily rants. Limbaugh routinely says that CNN stands for the Clinton News Network and has only recently adapted that to say the NBC is the National Barak Corporation. So the wags behind Fox News assert that their start-up was only an attempt to even the playing field. That thesis tends to fall apart on two counts--non-affiliated news review groups have routinely shown that the major broadcast news organizations show little if any bias, and, more importantly, Fox's penchant for (how to put this politely?) "skewing" facts to their preferred point of view has become legendary.

There's little doubt that those on the right will decry this piece as traipsing through the same muck it alleges Fox does, and there's similarly little doubt that a documentary funded by MoveOn.org and Common Cause is wearing its political bent on its sleeve. But there's also no denying the factual examples so pointedly brought the bear on the documentary's major thesis that Fox is nothing more than a Republican Party operative, albeit one being broadcast around the world to three-quarters of the world's population. The documentary has several segments which start with actual Fox executive memos outlining the "talking points of the day," several culled from the Bush White House or Republican partisans, and then cuts to "report" after "report" echoing the message of the day in lockstep. There's a reason Limbaugh calls his acolytes ditto-heads.

The most interesting aspect to this re-release are the extras (listed below), which highlight Fox's continued bashing of liberals and progressive causes. Most disturbingly in this arena is the segment where Fox asserted for days that Obama was a Muslim who had attended a Madrasa as a child, two things which are demonstrably false. But as John Kerry learned with the Swift Boat attacks of 2004, it doesn't matter if something is true or not, if a lie is repeated enough times it seeps into the public subconscious and develops a life of its own independent of any veracity or verifiability.

While some might argue with the outright dogmatism of Outfoxed, all but the most ardent right-wing adherents will probably find a lot of this documentary routinely disturbing, some of it coming from first-hand accounts of former Fox employees, on air and behind the scenes. Watching blowhard Bill O'Reilly light into the son of a man killed in the 9/11 terrorist attacks because the boy is anti-war is not only distasteful, it's downright infuriating. The supposed moral superiority of the conservative pundits who make up the bulk of Fox's staff is exposed again and again in this riveting piece, and it unfortunately is not a pretty sight.

Virtually all of this documentary is simply feeds from Fox itself, so the full frame image is simply of television broadcast quality. Interpolated interview segments boast perfectly fine color and contrast.

As with the image, the standard stereo soundtrack is fine, if unremarkable. Talking head commentary is always front and center and perfectly audible.

A wealth of extras make this re-release of most interest to people who either know of or have previously seen this piece. The bulk of the extras is the complete mini-form "Fox Attacks" series, which exposes various "victims", for want of a better word, of Fox's conservative agenda (as in the Obama episode mentioned above). There are also fascinating interviews with "Fox monitors," volunteers who watch Fox daily to document its inaccuracies. There's also a making of featurette which provides background, political and otherwise, into the genesis of this project.

As disturbing as Outfoxed is, it really should be seen with anyone who believes they're getting the "truth" from a major news organization. Highly recommended.