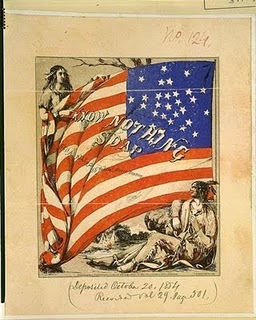 One of the greatest radio demagogues of all time, before Glenn Beck, was Father Charles Coughlin in the 1930's. At one time he had a following of perhaps 30 million Right Wing sympathizers. He initially supported FDR until it began to dawn on him that FDR was not making "the right kind of changes." His magazine Social Justice was banned from magazine racks under the Espionage Act. At the end he was essentially a Nazi sympathizer. Coughlin accused Roosevelt of "moving this nation towards International Socialism."

Know Nothingism was a nativist American political movement. It began because of popular fears that the country was being over run by immigrants. hey feared American culture and traditions were being lost. They wanted immigration and naturalization of all immigrants stopped. These immigrants were the Irish.

The Know Nothings began in the 1840's and Father Coughlin believed Democrats were moving the nation into the Socialist camp in the 1930's. So what is new? At the speed the Left is making us Socialist none of us will be around to know.

Glenn Beck's Modus Operandi as Jonathan Schwartz notes on Tiny Revolution is to "Locate the most extreme statement by anyone on the other side, hype it as much as you possibly can to your side as embodying the true spirit and goals of your enemy." His use of lies, distortion and innuendo is effective unless you think through the point that he has virtually no facts. It is just a false play on raw emotion.

I look at Beck and others on the Right and I see a bunch of racist bigots hiding behind the language of the Constitution and freedom. Lets face it, Beck didn't get all wound up by the security forces in Afghanistan acting like they were at a Fraternity Toga party, yet the world was coming to an end because some members of ACORN acted absolutely stupidly and told someone how to run a brothel.

The difference here is that ACORN registers African Americans to vote. This is a Democratic Party constituency. So we seek to discredit ACORN in hopes of suppressing the Black vote since you can't have Poll taxes and other Jim Crow laws. ...

Learning Lessons From the Know Nothings