Also see: "The real IRS scandal," Los Angeles Times, May 14, 2013: "Allowing so many 'social welfare' groups to enjoy tax-exempt status while participating in politics must stop. The IRS is obligated to scrutinize applicants, 'tea party' or no."

Photo: White House Press Secretary Jay Carney answers questions on recently disclosed information relating to the attack on the U.S. consulate in Benghazi and a recent news report regarding targeted audits by the Internal Revenue Service of organizations supporting the Tea Party, during a press briefing at the White House May 10, 2013 in Washington, DC. Photographer: Win McNamee/Getty Images 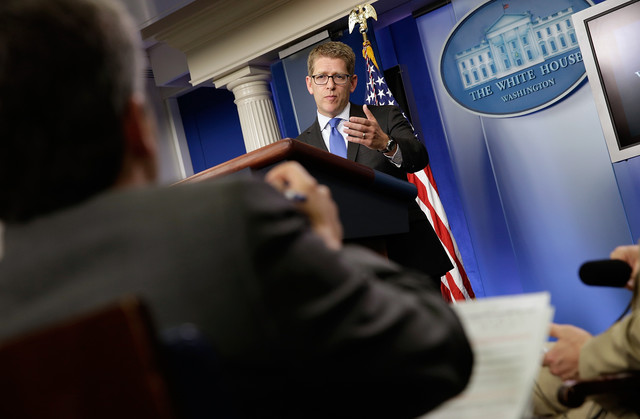 The Internal Revenue Service, under pressure after admitting it targeted anti-tax Tea Party groups for scrutiny in recent years, also had its eye on at least three Democratic-leaning organizations seeking nonprofit status.

One of those groups, Emerge America, saw its tax-exempt status denied, forcing it to disclose its donors and pay some taxes. None of the Republican groups have said their applications were rejected.

Progress Texas, another of the organizations, faced the same lines of questioning as the Tea Party groups from the same IRS office that issued letters to the Republican-friendly applicants. A third group, Clean Elections Texas, which supports public funding of campaigns, also received IRS inquiries.

In a statement late yesterday, the tax agency said it had pooled together the politically active nonpartisan applicants -- including a “minority” that were identified because of their names. “It is also important to understand that the group of centralized cases included organizations of all political views,” the IRS said in its statement.

Tax (GDP%NPOT) agency officials told lawmakers in a briefing yesterday that 471 groups received additional scrutiny, a total that indicates a crackdown on politically active nonprofit groups that extends beyond the Tea Party outfits.

Some lawmakers on Capitol Hill and campaign finance watchdog groups are pressing to expand congressional hearings to encompass everything the IRS is doing concerning nonprofits, including whether such groups should be allowed to spend money on political efforts at all.

Ron Wyden, an Oregon Democrat who sits on the Senate Finance Committee, which is conducting its own IRS investigation, has introduced legislation with Alaska Republican Senator Lisa Murkowski to require all groups spending money on politics to disclose their donors.

Political spending by nonprofits incorporated under Section 501(c)(4) of the tax code has increased since the U.S. Supreme Court (1000L) in 2010 removed limits on independent corporate and union spending and other court rulings paved the way for wealthy individuals to spend unlimited sums in elections.

Outside groups -- including nonprofit social-welfare groups that don’t disclose their donors -- spent $1 billion in the 2012 elections, three times as much as they did four years earlier, according to the Center for Responsive Politics, based in Washington.

“The real problem is that phony 501(c)(4) groups are exploiting the tax laws to protect donors who don’t want to be held accountable for vicious, deceitful political ads,” said Melanie Sloan, executive director of Citizens for Responsibility and Ethics in Washington.

In early 2011, the IRS denied the tax-exempt status of an affiliate of the San Francisco-based Emerge America, which trains Democratic women to run for office. The agency said it was disqualified because the group’s activities were “conducted primarily for the benefit of a political party and a private group of individuals, rather than the community as a whole.”

The decision was a surprise because four of Emerge America’s affiliates and its main headquarters already had been approved as nonprofits.

The tax agency on Oct. 21, 2011, revoked those approvals. The national organization and its state affiliates are now incorporated under Section 527 of the tax code.

An Austin, Texas-based group, Progress Texas, received a letter from the IRS in February 2013 when it sought nonprofit status. The letter came from the agency’s Laguna Niguel, California, office, which sent essentially the same queries to Republican-leaning groups.

As with the Tea Party groups, the IRS sought copies of promotional materials, backgrounds of officers, meeting minutes and specifics about activities, such as get-out-the-vote drives, that the organization said it would conduct.

Matt Glazer, former executive director, said the questionnaire was time-consuming though not intrusive.

“It is up to the IRS and the government to do the due diligence necessary,” Glazer said in a telephone interview yesterday. “I’m not saying it was fun but it was important.”

His group was approved.

Clean Elections Texas, a Dallas-based group that backs taxpayer funding of elections -- a position that aligns with many Democrats -- also had to answer queries.

“The IRS is finally doing its work, that was my feeling about it,” Liz Wally, the group’s executive director, said yesterday in a telephone interview. Her group was also approved for nonprofit status.

Two law firms that represent 33 Republican-leaning organizations that say they were targeted by the IRS have said none of their clients was rejected for tax-exempt status.

Two of the groups gave up after long delays, said Gene Kapp, a spokesman for American Center for Law and Justice. Of the 27 groups the Washington-based firm represents, 15 have been approved and the other 10 are awaiting word from the IRS, Kapp said.

Documents made public by lawyers for the Tea Party groups showed that they received letters from three other IRS offices besides Cincinnati -- Washington D.C. and two in California, El Monte and Laguna Niguel.

“That’s just not how government works,” he said in a telephone interview. “There’s a boss who said, ’Here is who we are targeting and here is what we are going to ask them.’”

The IRS controversy reared up last week when Lois Lerner, the official in charge of overseeing tax-exempt groups, said the agency was wrong to pay special attention to organizations that used key words such as “tea party” or “patriot” or had policy positions on smaller government.

Her May 10 disclosure came ahead the Inspector General’s report out yesterday. The report concluded that “ineffective management” allowed the inappropriate criteria to be developed and kept in place for more than 18 months.