Ida Tarbell, the Woman who Broke Up the Rockefeller Trust 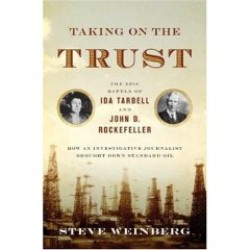 Re Taking on the Trust: The Epic Battle of Ida Tarbell and John D. Rockefeller, by Steve Weinberg:

This is a qualified recommendation. The book is published by Norton, the culprits who released the final 9/11 Commission Report, an adventure in investigative misdirection, reinforcement of cover stories, opinion formation.

On April 20, 2008, Weinberg, writing about the John Kennedy assassination in the Boston Globe, claimed, with fatuous confidence:

"As an investigative journalist with about 40 years' experience, I have read a couple of dozen books purporting to solve the JFK assassination with curiosity. Skepticism, too. I understand the nature of evidence - I wrote a book used in newsrooms and classrooms about it - and because of that understanding, I doubt any author can solve all the mysteries surrounding the events of Nov. 22, 1963."

Sure-sure. Weinberg is a Good German whose frequently self-cited credentials are negated by a myopic ("skeptical") mind. I woudln't trust him to report honestly on anyone living in Langley, Virginia ... but here we have a book written by Weinberg of some actual historical value, I assume (but will withhold judgment until actually reading it, of course - and be assured that I will approach it with the utmost "skepticism"). - Alex Constantine

Investigative journalist Weinberg (Armand Hammer: The Untold Story) briskly recounts the story of the rise of the Standard Oil monopoly in the late 19th century and muckraking reporter Ida Tarbell's role in bringing it down. The book is a study in opposites: John D. Rockefeller used his enormous wealth to establish the staid, stable family life he had lacked as a youngster. Tarbell—raised in bourgeois stability, intellectually ravenous and interested in the women's movement from an early age —resisted women's traditional domestic role. Wishing to help address society's problems, Tarbell was lured into magazine writing, where she developed what Weinberg calls her trademark tone of controlled outrage. In her articles on Standard, published just after the turn of the 20th century in McClure's and then in book form, she amassed evidence that Rockefeller engaged in unfair competition and argued forcefully that all Americans should be concerned with business ethics. Her reporting helped create the modern genre of investigative journalism, and the author's brief references to Wal-Mart and contemporary journalism suggest that he hopes this engaging account—a likely pick for journalism classes—can help inspire more reporters to follow in Tarbell's footsteps.