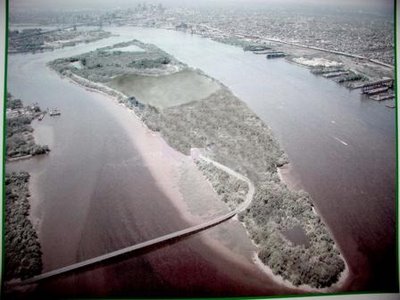 Leftist Venezuelan President Hugo Chavez met President Barack Obama recently at the Summit of the Americas. Chavez gave Obama a book about colonialism in Latin America and an island. Petty's Island is home to a fuel-storage center used by Venezuela-owned CITGO.

Well, Chavez gave it back, and it's going to be a nature preserve, specifically preserving two bald eagles. That's not the only good thing about the return of the island to U.S. ownership, though. The island is a part of Pennsauken Township, NJ, and, according to their web site, the pirate Blackbeard parked his pirate ship there whenever he wanted to hang out in Philadelphia. Consequently, we think a few acres for a piracy museum isn't too much to ask.