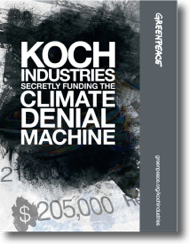 A new report from Greenpeace says that Koch Industries is a “financial kingpin” supporting climate skeptics and opposition to clean energy development.

You’ll likely hear a lot about this today and in coming weeks. Greenpeace has unveiled a new report highlighting Koch Industries, one of the biggest industrial conglomerates you’ve probably never heard of.

Based in Wichita, Kan., the company, through its network of subsidiaries, is involved in everything from ranching and mineral mining to chemicals, paper and pulp products, fertilizer production, and oil refining.

But the Greenpeace report suggests that Koch has also made a small industry of funding research and public relations endeavors aimed at undermining the prevailing scientific view that human-driven greenhouse gas emissions are contributing to a warming planet — as well as financing opposition to the development of clean-energy policy and technologies.

The report charges, for instance, that Koch provided financing for organizations that heavily propagated the so-called “ClimateGate” scandal. In another instance, according to the report, a Koch foundation — along with Exxon Mobil and the American Petroleum Institute — helped finance a 2007 analysis suggesting that polar bears were not threatened by climate change.

(That conclusion was subsequently challenged.)

In sum, the report characterizes Koch as the “financial kingpin of climate science denial and clean energy opposition.” From the Greenpeace report:

This private, out-of-sight corporation is now a partner to Exxon Mobil, the American Petroleum Institute and other donors that support organizations and front-groups opposing progressive clean energy and climate policy. In fact, Koch has out-spent Exxon Mobil in funding these groups in recent years. From 2005 to 2008, Exxon Mobil spent $8.9 million while the Koch Industries-controlled foundations contributed $24.9 million in funding to organizations of the ‘climate denial machine.’

“Based on this experience, we support open, science-based dialogue about climate change and the likely effects of proposed energy policies on the global economy,” Ms. Cohlmia added.

The wire service noted that representatives of Koch had not yet seen the Greenpeace report. We’ll update this post with any further responses from the company.