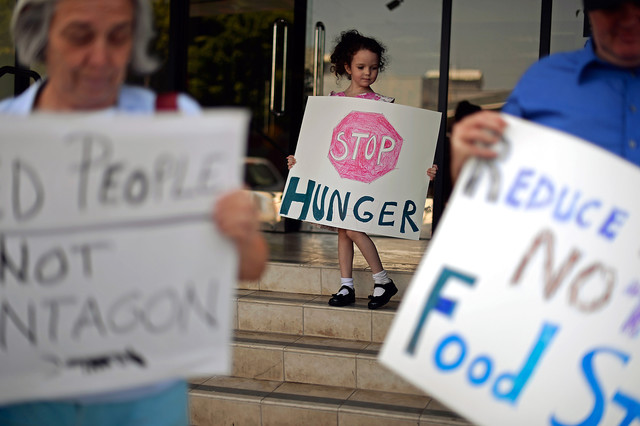 More pressing for many Republicans, however, is easing automatic budget cuts set to slam the military.

The chairmen of the House and Senate Budget panels plan to release their budget plans this week – the House on Tuesday and the Senate on Wednesday. The nonbinding measure called a budget resolution sets broad parameters on taxes and spending; it requires follow-up legislation later this year to implement its balanced-budget goals, and Republicans are unlikely to take on that task as long as President Barack Obama occupies the Oval Office.

Instead, they will propose major spending cuts to programs such as Medicare, health care subsidies, food stamps and the Medicaid program for the poor and elderly to produce a budget that’s balanced. Such cuts, if actually implemented later, would likely slash spending by $5 trillion or so over the coming decade from budgets that are presently on track to spend almost $50 trillion over that timeframe.

Elderly, disabled among those hit hardest by cut in food stamp benefits

By Robert Gebelhoff of the Journal Sentinel (Excerpt) 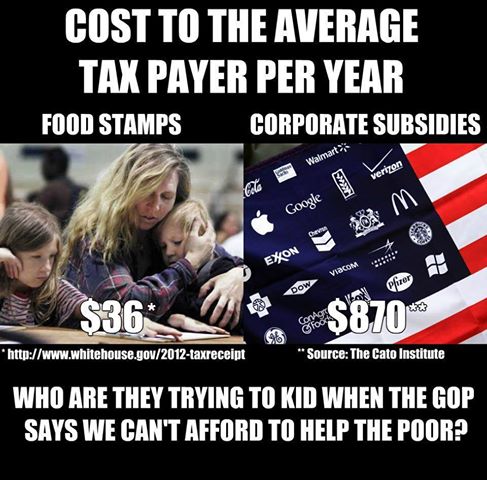 … “Case after case, we found people who were like, ‘What happened to my benefits?'” Tussler said. “Most people just got cut off, but they weren’t understanding why they were cut.”

Statewide participation in the FoodShare program dropped by 40,000 people over the past year after it peaked at around 860,000 in 2013. That translates to a 4.6% drop in participation, marking the first time Wisconsin saw a persistent decrease in the number of people taking part in FoodShare over the past 15 years.

The cuts have been implemented on a rolling basis since they were enacted. They follow a first round of reductions that came after federal stimulus funds expired late in 2013.

Tussler said the aid has been reduced so much that many recipients don’t even bother to cash in.

But disabled recipients on a fixed income, like 56-year-old Sherry Davis, have no choice but to make do with the $16 she’s given for food for the month.

Davis said the cuts will probably mean she will have to give up most of her meat and will have to spend less on toilet paper and paper towels. It also means an increased reliance on food pantries.

The most recent data from Wisconsin’s Department of Health Services, from November, shows that households with an elderly or disabled resident are getting an average of $144 a month in benefits a month, but a quarter of the caseload is receiving $20 a month or less.

Since an initiative known as “Heat and Eat” ended in Wisconsin last year, the number of cases of elderly and disabled people receiving less than $20 in aid rose by about 7,000 — at twice the rate from the previous year.

A handful of Milwaukee legislators are looking to restore benefits with legislation reinstituting Heat and Eat.

Here’s how the program worked:

· The lower net income a person reports to FoodShare, the more benefits the person receives. In reporting income, people are able to deduct certain payments — like rent or mortgage, shelter costs and utility costs.

· To simplify income reporting, Wisconsin and 15 other cold-weather states offered a single deduction for heating and cooling costs. They also gave recipients the full deduction if they received any federal money through a heating assistance program called LIHEAP.

· To increase food benefits to people in Wisconsin, the state provided a $1 annual LIHEAP benefit to all FoodShare households. As a result, anybody in the FoodShare program received more food benefits.

Heat and Eat was the target of a number of conservative groups, like the Heritage Foundation, which decried it as a loophole contributing to an expansion of welfare and the national deficit.

They included a provision in the 2014 Farm Bill that said recipients could qualify for the utility deductions only with a LIHEAP payment of at least $20 annually. The Congressional Budget Office projected the change in policy would cut federal spending by $8.6 billion nationally over the next 10 years.

In Wisconsin, Heat and Eat added on average an extra $25 in food benefits. For elderly and disabled people in subsidized housing, who usually have their heat included in their rent, ending the program was a large loss in income deductions and in their resulting food aid.

Most states using Heat and Eat as a tactic responded by offering more LIHEAP money to recipients to preserve allowances to recipients. Wisconsin, New Jersey and Michigan were the only states not to do this.

The Hunger Task Force estimated that by pumping up LIHEAP money spent by taxpayers by $5.4 million to FoodShare recipients, the state would be able to preserve $276 million in benefits.

In the Wisconsin Legislature, Rep. David Bowen (D-Milwaukee) plans to introduce a bill to do just that in the second half of the year. This would be the second time Democratic legislators tried to restore the aid, but an effort led by Reps. Evan Goyke of Milwaukee and Katrina Shankland of Stevens Point failed to gain traction with Republicans last year.

Bowen said that Republican-controlled legislatures in Pennsylvania and Montana pulled together legislation to preserve their Heat and Eat programs.

Wisconsin could follow suit, but that would mean state Republicans going against their federal counterparts, who remain opposed to the practice. Ryan has criticized states for reinstating Heat and Eat and supported getting rid of Heat and Eat options altogether in the future.

State Republicans, including Kitty Rhoades, secretary for the state Department of Health Services, and state Rep. Mark Born of Beaver Dam, who heads the Public Benefits Reform Committee, declined to comment on the subject because Bowen’s legislation had not yet been introduced.

Gov. Scott Walker did not take a stance on the issue when legislation was previously introduced, but a spokesman for his office said at the time that it could not be done through executive order and only through legislative action.

WASHINGTON (AP) — House Republicans are considering adding tens of billions of dollars to President Barack Obama’s request for overseas military operations in an effort to get around tight limits on Pentagon spending. The move comes as Republicans are set to unveil their latest budget plan.

Obama requested $51 billion for Pentagon operations in Afghanistan, Iraq and elsewhere, but GOP aides said Monday party leaders are weighing figures above $90 billion — enough to surpass Obama’s proposal to spend $38 billion above the limits for the budget year beginning in October.

GOP defense hawks have promised not to support any budget that doesn’t at least match Obama’s $561 billion request for defense, but a 2011 budget “sequestration” law imposes a $523 billion limit on the defense budget — an automatic cut of $54 billion below previously agreed levels.

War spending, however, is outside the limits and offers an easy way around the automatic cuts imposed after the failure of lawmakers to replace sequestration with alternative deficit-cutting moves.

The exact figure has yet to be determined and was still the subject of debate among top House Republicans on Monday.

But the move is likely to rile many conservatives who want to stick with the tight limits on spending.

Price promises to balance the nation’s budget within a decade and rein in major programs such as food stamps and Medicare. He also promises to avoid tax increases.

The chairmen of the House and Senate Budget panels plan to release their budget plans this week — the House on Tuesday and the Senate on Wednesday. The nonbinding measure called a budget resolution sets broad parameters on taxes and spending; it requires follow-up legislation later this year to implement its balanced-budget goals, and Republicans are unlikely to take on that task as long as President Barack Obama occupies the Oval Office.

Instead, they will propose major spending cuts to programs such as Medicare, health care subsidies, food stamps and the Medicaid program for the poor and elderly to produce a budget that’s balanced. Such cuts, if actually implemented later, would likely slash spending by $5 trillion or so over the coming decade from budgets that are presently on track to spend almost $50 trillion over that timeframe.

In the House, 70 Republicans have signed a letter by Rep. Mike Turner, R-Ohio, pledging their “unwavering support” for Obama’s $561 billion defense request instead of the $523 billion amount mandated under the 2011 budget deal. If they line up against Price’s budget plan as a bloc, it’ll be impossible to pass it.

A bipartisan Senate group, including Armed Services Committee members Lindsey Graham, R-S.C., Kelly Ayotte, R-N.H., and Tim Kaine, D-Va., hopes to develop a package of alternative cuts and, perhaps, new revenues to replace the forced cuts to the Pentagon and nondefense programs. They’re hoping to replicate a 2013 budget pact that partially eased the automatic cuts for the 2014-15 budget years.

Defense hawks have long eyed adding additional money to overseas contingency operations, or OCO, accounts that are not bound by the automatic cuts to provide relief to core Pentagon accounts like training, operations and maintenance.

Previous Article
Newt Gingrich Once Probed by FBI Over Ties to Miami Arms Dealer Sarkis Soghanalian
Next Article
The Devil & the GOP: Six Thoroughly Disgraced Republican Officials On the Way Out 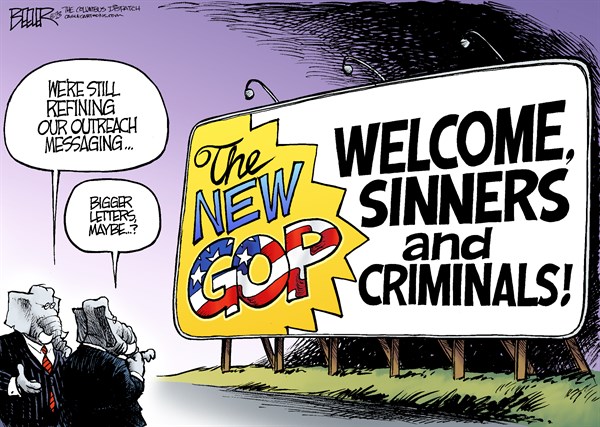 The Devil & the GOP: Six Thoroughly Disgraced Republican Officials On the Way Out
Mar 17