The Devil & the GOP: Six Thoroughly Disgraced Republican Officials On the Way Out - The Constantine Report
0 SHARES

GOP Watch » The Devil & the GOP: Six Thoroughly Disgraced Republican Officials On the Way Out

The Devil & the GOP: Six Thoroughly Disgraced Republican Officials On the Way Out

“The reason why we’re asking for change is because the party is not working,” Pearce said, who represents Ray County. “Our chairman has not responded to media calls, not offered a new direction, and really has been more interested in keeping his job than in leading in the party.” ...

Arkansas Republicans are defending a state legislator who had his adopted daughter exorcised before “rehoming” her and her sister with a man who later molested one of them.

The saga of Harris began with him and his wife adopting two girls in the state’s care. Then they subsequently “rehomed,” or gave them, to another family—the Francises—because the girls had severe behavioral issues. Both girls had previously been sexually abused in their birth family. Ultimately, one of the girls was sexually molested by Eric Cameron Francis, who had previously worked for Harris at the preschool he owned called Growing God’s Kingdom Inc.Francis is now in prison for the crime.

Last week, The Arkansas Times broke the story, which continues to unravel.

This week it came to light that Harris, who was first elected to office in 2010, also believed, according to sources interviewed by the newspaper, that one of the girls was possessed by demons and capable of communicating telepathically with her sister. As a result, he had a “specialist” perform an exorcism to rid the girl of any evil spirits.

Needless to say, the unfolding drama has distracted attention from the current legislative session, the first for GOP Gov. Asa Hutchinson and the first time since Reconstruction that Republicans have controlled the governor’s office and the statehouse simultaneously. Some Democrats are calling for the resignation of Harris, who is vice chairman of the House Committee on Children, Aging, and Youth, which deals with such adoption issues. But the legislator’s party remains solidly behind him. 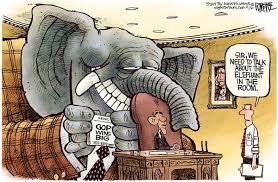 The Chairman of the 35th Representative District Committee for the Sussex County Republican Committee submits his resignation, days after being indicted by a federal grand jury on charges of illegal dealing in firearms. ...

Opaliski was charged recently by federal prosecutors with three counts of dealing firearms without a license and two counts of unlawful transfer of firearms.

His arraignment is scheduled for Thursday. In a new interview with the Los Angeles Times, the attorney of Federal District Judge Mark F. Fuller (11th Circuit, Alabama, Middle District) says Fuller was simply "defending himself" against his wife when she called 911, said she was being beaten, requested an ambulance, and was then found bloodied by police in an Atlanta hotel room in August of 2014.

That claim would appear to be at odds with the available audio evidence from the 911 call, segments of which were aired on MSNBC last year, and since obtained in full by The BRAD BLOG via public records request from the Atlanta Police Department. We publish the audio, in full, below for the first time, as it appears to contradict new claims by Fuller's attorney.

The interview with the LATimes also appears to confirm that the special five-judge panel convened by the 11th Circuit Court of Appeals to investigate the disturbing incident and make recommendations for action to that Circuit Court's Judicial Council is investigating very similar claims of domestic violence and substance abuse made by Fuller's first wife Lisa during their 2012 divorce proceedings.

According to the paper's Timothy M. Phelps, Fuller's Birmingham attorney "and longtime friend" Barry Ragsdale explained during a lengthy recent interview that the incident last summer which led to the arrest of Fuller at the Ritz-Carlton Hotel in Atlanta began after Fuller's current wife Kelli accused the judge of having an affair with his law clerk. That claim is consistent with the initial police report, though Ragsdale --- who has also dismissed allegations of infidelity and abuse made by Fuller's first wife as little more than "nonsense" and "gossip" --- goes a bit farther in defense of the judge this time. ...

The conservative editor-in-chief of Red State is calling for Rep. Aaron Schock’s resignation amid a scandal involving the use of public and campaign funds.

“Rep. Aaron Schock (R-Ill.) has proven himself incapable of handling his own money, the money of his donors, and taxpayer money,” Erick Erickson wrote Tuesday on the conservative blog “Red State.” “He has lived excessively off the backs of taxpayers who must be reimbursed and off of donors to whom he is now a servant.”

In recent weeks, reports have surfaced giving a behind-the-scenes look at the congressman’s lavish spending. Under Schock’s leadership, gifts given at swanky nightclubs in London and payments made during a golf fundraiser went unreported. Reports have revealed expensive private jets, stays at five-star resorts and a remodeling of his Capitol Hill office to resemble “Downton Abbey.” ...

State Rep. Gene Alday, R-Walls, who came under fire after his racist comments appeared in a Clarion-Ledger article Sunday about public education, said today his remarks were out of context and that he's a nice guy.

"I'm not a bad person, and that makes me look like an evil person," Alday said Monday. "I didn't do anything wrong. The guy made me look like a fool."

The comments in question refer to African-Americans in his hometown of Walls, a small community in Desoto County. Alday, 57, said that he comes "from a town where all the blacks are getting food stamps and what I call 'welfare crazy checks.' They don't work."

He also said that when he went to the emergency room one time, "I liked to died. I laid in there for hours because they (blacks) were in there being treated for gunshots."

Since then, people around the state have condemned the remarks with some calling for his resignation.

House Democrats, including members of the Mississippi Legislative Black Caucus, held a press conference saying they're concerned Alday's words reflect the general sentiment among GOP leadership. They're calling for a serious discussion with top elected officials to address the issues. ...