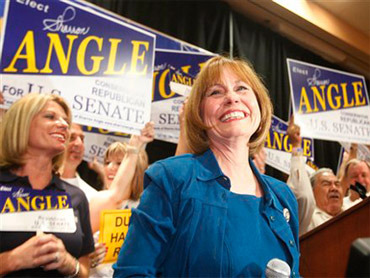 There was a time when openly associating with the cranks, racists, and conspiracy freakazoids of the John Birch Society would have spelled instant disaster for a politician’s career.

But in today’s climate of right-wing extremism, the John Birch Society has not only been re-legitimized, it’s been welcomed back into the Republican fold.

This weekend the JBS held an event in Utah, and the featured speaker was none other than Nevada’s GOP nominee for the US Senate, Sharron Angle.

The first Utah United Freedom Conference was held on September 18th, at the Radisson Hotel in Salt Lake City. The national sponsors of the event were The John Birch Society, Freedom 21, and the National Center for Constitutional Studies. Additionally, there were approximately 33 local sponsors including The John Birch Society, Utah Eagle Forum, Utah Farm Bureau, and the Utah Cattleman’s Association, as well as several 9/12 groups and others. The conference event was held through the day and was attended by 375 participants. …

The concluding speaker for the morning session was Steven Pratt, who has a Masters Degree in Education and did postgraduate work at the University of California at Berkley. He is working with the Center for Constitutional Studies and worked under the late W. Cleon Skousen. Mr. Pratt  spoke on “State Sovereignty, the Original Concept.”

Throughout the afternoon there were three breakout sessions featuring 13 different classes — all of which were focused on issues concerning constitutional government and individual liberties. Booths in the hall represented several of the participating organizations. The John Birch Society, for example, was present with two booths featuring books, magazines and DVDs to help inform the participants. Attendees found a wealth of additional knowledge and tools to help with their organizations.

More than a few participants indicated that the event gave them renewed determination and feelings of hope for America.

Deck the Halls with Slime: McCarthy, Born Again and Retooled for Our Time

The Intellectual Foundations of the Tea Party

New Yorker: Beck’s Rhetoric “a Revival of Ideas that Circulated on the Extremist Right Half a Century Ago”