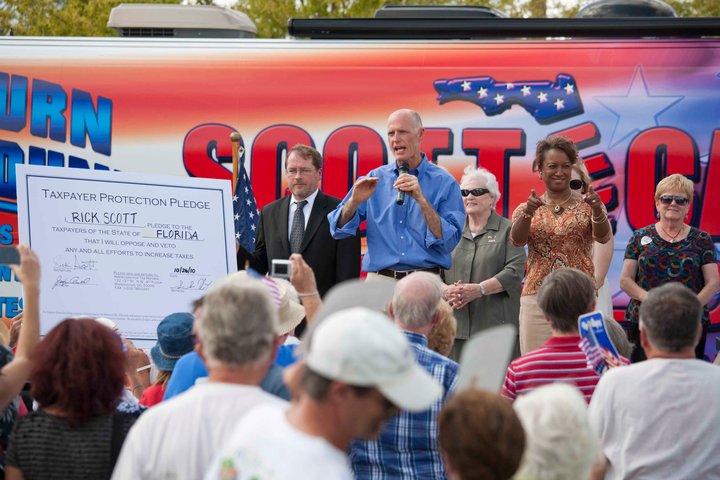 ... Scott ... didn’t sit down with one newspaper editorial board. That was a strategic decision, according to Scott’s Communications Director Brian Burgess. “Almost all of them endorsed Obama,” Burgess explains in an email. “They praised his health care plans. So you tell me, what is the point in trying to win over people who are so wrong? Rick Scott gets better use of his time going straight to the voters [rather] than trying to convince misguided editorial board members to endorse him.” Instead, Burgess says, the campaign is making an end-run around the tradition of answering questions from editorial writers. “We go straight to the voters by using ads, Facebook, and other social media, grassroots events. And of course it’s a myth that we don’t talk to the press. We do that too,” Burgess writes. “We just don’t waste time with editorial boards because they have already shown a failure to understand reality when talking about health care, or the negative impact of Barack Obama’s policies ... Burgess, who has been working with Scott since before the governor’s race, knows about non-traditional media campaigns. He is a 1992 graduate of Friends University, a Christian college in Kansas, and a former U.S. Army communications specialist. In 2007 he began work as spokesman for Johnson County, Kansas, District Attorney Phil Kline, a crusading anti-abortionist who had earlier, as attorney general, attempted to prosecute abortion provider George Tiller. Tiller was later killed by an abortion rights opponent. ... Burgess was also known for his tough handling of the press. After he left the D.A.’s office in August 2008, the weekly newspaper The Pitch, in Kansas City, asked Burgess for a comment on Kline’s handling of medical records in the abortion case. Burgess gave a detailed response, during which he complained about the “no-longer-credible Kansas media.” At the end of the email, Burgess wrote: “I really don’t miss some of you dipshits at all. Have fun in your world of make-believe.”

In September 2008, Burgess moved to Alexandria, Va., to work for CRC Public Relations, formerly Creative Response Concepts, which has a roster of right-wing clients. In 2004, CRC helped the 527 political group Swift Boat Veterans for Truth craft a media campaign attacking Democratic presidential candidate John Kerry, a decorated Vietnam veteran. Swift Boat Veterans took out ads against Kerry, claiming he overstated his record in Vietnam, created a documentary and produced a book, Unfit for Command, published by Regnery Publishing, also a CRC client. The ads were widely deemed unfair, but they were effective. “Swiftboating” became political jargon for devastating political attacks. In 2008 Regnery published The Case Against Barack Obama, which aimed to expose the president as “the #1 most liberal U.S. senator whose policies and inexperience could put our country in serious jeopardy,” according to the Regnery website. Before his run for governor, Rick Scott hired CRC to help set up Conservatives for Patients’ Rights, an advocacy group opposing health care reform, right after Obama took office in 2009. Burgess was the organization’s media relations contact. Conservatives for Patients’ Rights helped develop the strategy to distribute schedules of town hall forums to activists who showed up and often aggressively disrupted the meetings. Scott kept Burgess on to help handle communications, and an often aggressive press, during his run for governor. This summer, The Florida Independent approached Burgess with allegations from an ex-employee of Solantic, a chain of walk-in clinics founded by Scott, that the company was improperly billing Medicare. The Scott campaign and Solantic officials each called separate press conferences, but did not notify the Independent about either one. (Burgess later apologized and said the organization wasn’t on their media contacts list.) During Scott’s press conference, questions about Solantic prompted a testy exchange between the candidate and reporters. One reporter said Scott hadn’t answered questions, and Scott replied that he had: “You just don’t like the answer.” “I think his relationship with the press could be better,” says Sam Terilli, director of the University of Miami’s journalism program and former general counsel for The Miami Herald. Ignoring the media “is foolish and narrow-minded,” he says. “It’s not only difficult to act as if they don’t exist, it’s detrimental to the public.” But it’s not unique. “Texas Governor Rick Perry doesn’t do ed boards either,” Burgess writes. According to Politico, candidates around the country, many of them conservatives with tea party backing, have been avoiding the media this election season, in part to avoid making last-minute gaffes. One Nevada journalist called the lack of access there “unprecedented.” Many of the tea party candidates view the mainstream press with hostility and suspicion, and new media enable candidates to communicate directly with supporters. That’s especially true if, like multimillionaire Scott, they have the personal resources to buy political ads at will. ... Full story: http://floridaindependent.com/11719/the-right-wing-roots-of-rick-scotts-press-strategy