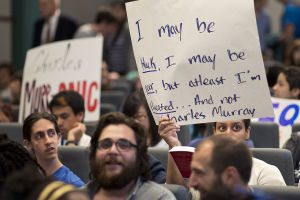 “… We do want to take a stand and show him that these views are not acceptable, not on the Rice campus, and not anywhere for that matter. …”

Rice University students from several campus groups protested against Charles Murray, a political scientist and author, at a talk hosted by the Rice Federalist Society and the Baker Institute Student Forum. The event was a part of Murray’s national tour for his new book, Coming Apart: The State of White America, 1960-2010. Murray gained national attention in 1994 for his book The Bell Curve: Intelligence and Class Structure in American Life, which argues that differences in intelligence can be linked with race and class genetically and environmentally.

Fed-Soc President Blake Delaplane said his club invited Murray to speak to the Rice community to encourage further dialogue regarding class structures in America on campus.

“Our organization’s invitation to Dr. Murray is not an endorsement,” Delaplane, a Duncan College junior, said. “Additionally, we strongly believe that [the] university setting is ideal for hearing and challenging speakers like Dr. Murray where students in support and opposition can exercise their free speech.”

Black Student Association President Jackie Mutai, the primary organizer of the student protest, said she was thankful student organizations came together to publicize and organize the protest.

“[Murray] helped prove my point that the Rice community speaks up when they are upset and makes sure to have their voice heard,” Mutai, a McMurtry College junior, said. “Now it is up to Rice to continue to facilitate a dialogue that they feel will help to develop our university.”

Representatives from BSA, the Hispanic Association for Cultural Enrichment at Rice, the Women’s Resource Center and the Asian Pacific American Student Alliance began protesting at 4:30 p.m. in front of Herring Hall. Faculty members were also in attendance. BSA member Brianne Rodgers said she chose to protest against Murray because of his racist and sexist views.

“The goal here is not to change [Murray’s] opinions, because at this point, there’s no way we’re going to change his opinions,” Rodgers, a Hanszen College junior, said. “But we do want to take a stand and show him that these views are not acceptable, not on the Rice campus, and not anywhere for that matter.”

HACER’s incoming president Crystal Olalde said HACER wanted to take this event as an opportunity for the Hispanic minority to speak out and show its presence.

“We do not tolerate being undermined,” Olalde, a Martel College junior, said. “I’m excited to see a lot of faces out here, and hopefully Charles Murray can see what Rice is about.”

Students held signs with slogans including “Correlation does not equal causation” and continued with chants such as “pseudoscience” and “not an anomaly” inside Herring Hall until Murray approached the microphone.

Murray spoke for a few minutes at the beginning of his talk regarding many people’s perception of him as racist and sexist.

“[We have a] blind, relentless belief that all the differences we see in the phenotype, in the manifestations of humanity around us, whenever there are inequalities, are because of injustices,” Murray said. “[This] not only runs against common sense, [but also] degrades our sense of what it means to be human.”

After speaking for a half hour, Murray opened the floor to questions. Several students asked Murray to clarify why he believes individuals’ productivity  diminishes when marriage stops being the primary form of societal organization. In a private interview, Murray said his opinion on the impact of the feminist revolution on the demoralization of men.

“I am not saying that the feminist revolution should not have occurred,” Murray said. “A collateral side effect that could not have been avoided involves the demoralization of working-class whites. That does not mean that, in order to cure the demoralization, women should stay in the kitchen and not go out and work.”

According to Murray, demoralization is contributing to working-class white men performing less community service, spending less time with family and being less involved in religion than they have been in the past. He said an increasing number of men are turning to sleep and television in their leisure time.

“[Demoralization] takes the form of men who grow into their twenties living off their girlfriends, sort of scrabbling around in a great economy, maybe dealing a little drugs, maybe doing a few things that are a little sketchy in terms of their legality, maybe occasionally picking up jobs but not hanging on to those jobs very often,” Murray said. “In fact, a lot of times, they’ll hang on to the job long enough to qualify for employment benefits, and then they’ll quit the job in a very conscious decision. They’re playing six or seven hours of video games a day.”

“Why is it in the past that men in their hot-blooded late teens and early twenties settled down and got married?” Murray said. “One was that it was a rite of passage, and that if you did not get married, you were seen as socially suspect by the rest of the community. And another reason was that that was the only way you could get regular sexual access to a woman, unless you paid for it. You didn’t get laid a lot as a single male in the 1930s and 1940s unless you were married.”

According to Murray, a man’s psychological self-esteem is connected to his family’s well-being. For example, if the family continues to proceed almost as well without the man’s presence, then his sense of importance to that family is impacted negatively.

“All of those things say to a young male [now], ‘Hey, stay single, go out [where there are] lots of girls, have a good time,’ and that’s what they’re doing,” Murray said. “It makes perfect sense.”

Murray discussed his new book, Coming Apart, and the ideas his opinions about class distinctions in America.

“In the past, you had a ruling elite in this country that was largely drawn from those in middle class and working class community,” Murray said. “They still remembered how it worked. We’re increasingly being governed by people who have lived in the upper-middle class bubble who feel much more affinity with [their European counterparts]. That is a fundamental betrayal of historically what it has meant to be an American.”

Rodgers said after the event that, on the surface, Murray’s statements do not sound incendiary, but that a deeper analysis reveals the assumptions behind his argument.

“For example, he said that before the decline of society in the 1960s, America had a civil society that represented a way of human flourishing,” Rodgers said. “But how exactly does he come to the conclusion that America was flourishing? Who has to flourish? People of color and women certainly weren’t flourishing.”

Delaplane said the event was a success, and he was happy to see students from organizations across campus engaging in the discussion.

“There were some disruptions in an otherwise respectful crowd,” Delaplane said. “The discussion provided by the Rice Federalist Society and the Baker Institute Student Forum uniquely acted as a public forum in which dissenting opinions to Dr. Murray’s were voiced clearly in a professional intellectual environment.”

BISF President Nathan Joo said the mission of the BISF is to facilitate policy dialogue from a wide range of perspectives and to advance a forum for students, faculty and scholars.

“We believe in open, transparent and critical dialogue,” Joo, a Will Rice College junior, said. “BISF thanks all students for their participation and insightful questions and comments.”