Controlling the Brain with Light 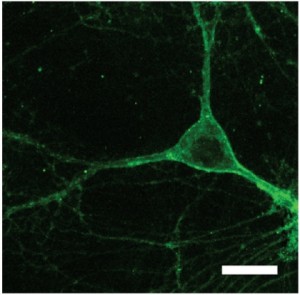 Our brains mediate everything we perceive, feel, decide, and do. This is accomplished by an incredibly densely packed network of hundreds of billions of neurons, which fall into perhaps hundreds of different classes, defined by their shape and the molecules they contain. Each computes in concert with thousands of others, its activity dynamically changing on the millisecond timescale. In many diseases, specific computations mediated by the brain are thrown into disarray when specific classes of neuron are compromised. Such neurological and psychiatric disorders affect billions of people worldwide and are some of the most intractable medical needs of our time. To treat these diseases, we need to understand how the elements of a neural circuit work together. This requires the ability to selectively perturb the activity of specific neurons within the circuit, observing the resultant impact on neural computation and behavior.

Until now, the ability to test the causal role of specific neuron types in emergent brain functions was limited. Lesions and pharmacological agents can eliminate the activity of neurons in a region, but the effects would apply to all cell classes in a region and would be long-lasting or even permanent, preventing researchers from analyzing when a given set of cells made its critical contribution. Stimulation of brain tissue with electrodes or magnetic fields enables temporally precise driving of neural activity, but such methods affect all neuron classes located within a region, including projection pathways entering or passing through the region. Accordingly, we have developed a series of molecular tools that enable activation or silencing of genetically specified neurons.

These are proteins encoded by genes from natural species of algae, fungi, and archaebacteria. These ‘optogenetic’ proteins can be thought of as tiny, genetically encoded solar panels: they sit, embedded, in the membranes of cells such as neurons and respond to light by altering the voltage of the cell. Since neurons are themselves electrical devices, using a virus to express these genes in neurons enables activation or silencing of the latter by different colors of light.

We have shown that the algal gene channelrhodopsin-2 (ChR2), which encodes a light-gated ion channel, can be inserted into neurons to activate them by brief pulses of blue light.1 In addition, my group has found that a halorhodopsin (Halo/NpHR), a light-gated chloride pump, can be used to silence neurons by yellow/red light.2 ChR2 and Halo can be used together in the same cell to activate and quiet neural activity with two different colors of light, enabling precise perturbations of the timing of electrical signals in the brain.3

More recently, we found a new reagent, nicknamed Arch (see Figure 1), that offers order-of-magnitude improvements in silencing power and recovery kinetics over halorhodopsins and enables near-digital switching off of neurons in the awake-behaving brain in response to yellow-green light.4 We also identified a reagent that we nicknamed Mac, a blue-light-driven neural silencer, opening up the ability to silence (alongside Arch or Halo) two different populations of neurons with different colors of light (see Figure 2).

Figure 1. A neuron expressing the Arch gene and generating light-activated proteins that are then localized to the outside of the neuron, where they can control the neuron's activity in response to pulses of light. Scale bar: 20 μm.4

Note that these reagents can be expressed in practically any cell type. Given that cardiac, immune, pancreatic, and other kinds of cells can be electrically modulated, we can perform ‘synthetic physiology’ on these cells, controlling their state to assess how they contribute to organism or system-level functions. 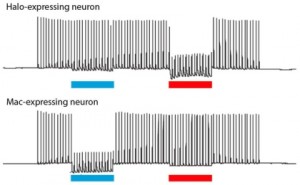 In summary, we have identified optogenetic proteins that act as molecular tools to make neurons controllable with pulses of colored light. We are now developing high-count arrays of optical fibers that enable perturbation of activity in distributed and complexly shaped neural circuits, in order to open up systematic analysis of brain circuits. By revealing the neural substrates that can most powerfully control and correct aberrant neural computations, these tools will lead to better therapies for treating brain disorders such as post-traumatic stress disorder, epilepsy, and Parkinson's disease. New drugs can be generated that target these control circuits but not other unrelated ones, presenting more efficacy and fewer side effects. They may also present new targets for neuromodulation therapies such as deep-brain and transcranial magnetic stimulation. The ability to optically control cells may directly enable a new generation of optical prostheses, which can precisely control aspects of patient physiology using temporally precise pulses of light.