Mind Control? ‘Sam’ Clark Rockefeller will likely get the boot from U.S. 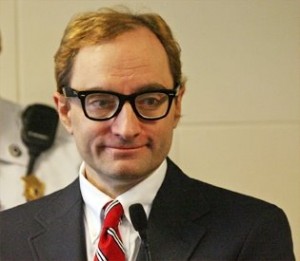 Rockefeller/Gerhartsreiter appears to be dissociative - a multiple personality ... Multiple personalities don't just happen ... They are created by torture at a young age ... Is Rockefeller a programmed, mind controlled multiple, a "Manchurian Candidate?":

" ... Rockefeller stole the Social Security number of [David 'Son of Sam'] Berkowitz, 55, who killed six people between 1976 and 1977 on what he claimed were the orders of a dog. Rockefeller is a person of interest in the 1985 disappearance of a California couple. ... "

Berkowitz was a programmed killer, a mind control case ... It's quite possible that one of Rockefeller/Gerhartsreiter's personalties were ordered to kill the California couple, John and Linda Sohus ... and that he has killed others.

Prosecutors have, since the initial announcement, revised the Berkowitz Social Security angle, according to Boston's WCVB-TV: "Gerhartsreiter used a Social Security number belonging to a man named David Berkowitz, prosecutors said, but they do not have evidence that the number belonged to the serial killer of the same name. Mark Jay Heller, who defended the 'Son of Sam' murderer in court, told the Herald that a man with an accent had contacted him in the 1980s to ask for Berkowitz’s Social Security number. Heller said the man claimed that he was a relative of Berkowitz and said that he wanted to 'confirm' the number.

“'I thought it very odd that he would be calling me to get someone else’s Social Security number; he was very aggressive about it,' Heller told the paper. 'He did have somewhat of an arrogance in his tone.'

"Heller said that the man had a foreign accent and believes that it was Gerhartsreiter. A spokesman for Suffolk District Attorney Daniel Conley said that Gerhartsreiter had used the Social Security number during a job search two decades ago."

Pipsqueak pretender Clark Rockefeller - whose life of lies included stealing the Social Security number of New York serial killer David “Son of Sam” Berkowitz - may get the boot back to Bavaria.

In a double whammy for the identity-shuffling German, whose true name is Christian Karl Gerhartsreiter, Rockefeller’s $50 million cash bail was revoked and Assistant Suffolk District Attorney David Deakin said it’s “overwhelmingly likely” his green card will be, too, once the kidnapping charge against him is resolved.

Rockefeller, 47, obtained a green card in 1981 by marrying a Wisconsin woman he promptly ditched.

U.S. Immigration and Customs Enforcement spokesman Paula Grenier said there is not a detainer on Rockefeller, but, “ICE is aware of the case and continuing to investigate.”

Defense attorney Stephen Hrones was before Suffolk Superior Court Judge D. Lloyd MacDonald yesterday to propose swapping Rockefeller’s bail for house arrest on a GPS anklet. The strategy backfired when MacDonald, citing Rockefeller’s “ingenious capacity to transform himself,” rescinded bail entirely, saying no amount of money would keep Rockefeller from running, and GPS only works “as long as the person who is wearing the device does not devise a means of overcoming it.”

Deakin alleged Rockefeller stole the Social Security number of Berkowitz, 55, who killed six people between 1976 and 1977 on what he claimed were the orders of a dog. Rockefeller is a person of interest in the 1985 disappearance of a California couple.

Rockefeller is accused of kidnapping his 7-year-old daughter Reigh “Snooks” Storrow Mills Boss from his second marriage while on a supervised visit in the Back Bay July 27. When law enforcement captured the fugitive father in Baltimore and asked if he’d intended to let the girl’s frantic mother know she was OK, Deakin said Rockefeller replied, “I hadn’t given that any thought.”