"... Between the years 2000 and 2012, the U.S. government had an arrangement with Mexico's Sinaloa drug cartel that allowed the organization to smuggle billions of dollars of drugs while Sinaloa provided information on rival cartels. ...DEA agents met with high-level Sinaloa officials ... more than 50 times since 2000. ..."

An investigation by El Universal found that between the years 2000 and 2012, the U.S. government had an arrangement with Mexico's Sinaloa drug cartel that allowed the organization to smuggle billions of dollars of drugs while Sinaloa provided information on rival cartels.

Sinaloa, led by Joaquin "El Chapo" Guzman, supplies 80% of the drugs entering the Chicago area and has a presence in cities across the U.S.

Related (and hypocritical): "Chicago's new Public Enemy No. 1: 'El Chapo'" (CNN) --  "The U.S. Treasury Department has declared [Guzman] the most influential trafficker in the world, and Mexican authorities have been on his tail since his 2001 escape from a Mexican prison.  ..."

There have long been allegations that Guzman, considered to be "the world’s most powerful drug trafficker," coordinates with American authorities.

But the El Universal investigation is the first to publish court documents that include corroborating testimony from a DEA agent and a Justice Department official.

The written statements were made to the U.S. District Court in Chicago in relation to the arrest of Jesus Vicente Zambada-Niebla, the son of Sinaloa leader Ismael "El Mayo" Zambada and allegedly the Sinaloa cartel’s "logistics coordinator."

"On March 17, 2009, I met for approximately 30 minutes in a hotel room in Mexico City with Vincente Zambada-Niebla and two other individuals — DEA agent David Herrod and a cooperating source [Sinaloa lawyer Loya Castro] with whom I had worked since 2005. ... I did all of the talking on behalf of [the] DEA." 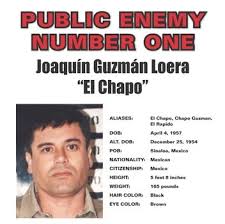 A few hours later, Mexican Marines arrested Zambada-Niebla (a.k.a. "El Vicentillo") on charges of trafficking more than a billion dollars in cocaine and heroin. Castanon and three other agents then visited Zambada-Niebla in prison, where the Sinaloa officer "reiterated his desire to cooperate," according to Castanon.