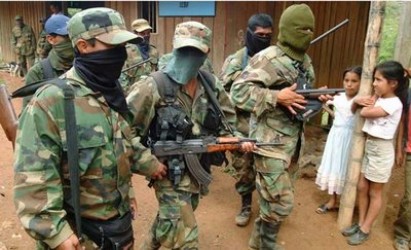 ” …human rights groups were examining a steady increase in the reports of civilian killings since 2002, when commanders intensified a counterinsurgency financed in no small part by more than $500 million a year in U.S. aid. But more than 100 claims of civilian deaths at the hands of the security forces have emerged in recent weeks alone …”

SOACHA, Colombia: Julian Oviedo, a 19-year-old construction worker in this gritty patchwork of slums, told his mother on March 2 that he was going to talk to a man about a job offer. A day later, Oviedo was shot and killed by army troops about 560 kilometers to the north. He was classified as a subversive and registered as a combat kill.

Colombia’s government, the Bush administration’s top ally in Latin America, has been buffeted by the disappearance of Oviedo and dozens of other young, impoverished men and women whose cases have come to light. Some were vagrants, some were street vendors or manual laborers. But their fates were often the same: They were catalogued as insurgents or criminal gang members and killed by the armed forces.

Prosecutors and human rights researchers are investigating hundreds of such deaths and disappearances, contending that the Colombian security forces are murdering civilians and making it look as if they were killed in combat, often by planting weapons on or near their bodies or dressing the corpses in guerrilla fatigues.

With soldiers under intense pressure in recent years to register combat kills to earn promotions and benefits like time off and extra pay, reports of civilian killings are climbing, prosecutors and researchers said, pointing to a grisly facet of this country’s long internal war against leftist insurgencies.

The deaths have called into question the depth of Colombia’s recent strides against the Revolutionary Armed Forces of Colombia, or FARC, and have begun to haunt the military hierarchy.

On Wednesday, President Álvaro Uribe’s government announced that it had fired 25 officers and soldiers – including three generals and four colonels – in connection with the deaths of Oviedo and 10 other young men from Soacha, whose bodies were discovered in unmarked graves in a distant combat zone. The purge came after an initial shakeup last Friday, when the army command relieved three colonels.

At a news conference Wednesday, Uribe said that an internal military investigation appeared to have uncovered “crimes that in some regions had the goal of killing innocents, to make it seem as if criminals were being confronted.”

The wave of killings has heightened focus on the U.S. Embassy here, which is responsible for vetting Colombian military units for human rights abuses before they can receive aid. A study of civilian killings by the Fellowship of Reconciliation and Amnesty International, two rights groups, found that 47 percent of the cases reported in 2007 involved Colombian units financed by the United States. 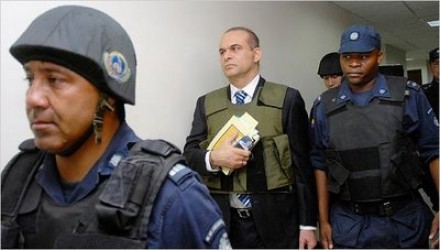 “If the responsibility of the army is to protect us from harm, how could they have killed my son this way?” Blanca Monroy, 49, Oviedo’s mother, asked in an interview in her cinderblock home here. “The official explanation is absurd, if he was here just a day earlier living a normal life,” she said. “The irony of it all is that my son dreamed of being a soldier” for the government.

Even before the most recent disappearances and killings, prosecutors and human rights groups were examining a steady increase in the reports of civilian killings since 2002, when commanders intensified a counterinsurgency financed in no small part by more than $500 million a year in U.S. aid.

But more than 100 claims of civilian deaths at the hands of the security forces have emerged in recent weeks alone, from nine different parts of Colombia. Cases have included the killing of a homeless man, a young man who suffered epileptic seizures and a veteran who had left the army after his left arm was amputated.

In some cases, victims’ families spoke of middlemen who recruited poor men and women with vague promises of jobs elsewhere, only to deliver them hours or days later to war zones where they were killed by soldiers.

“We are witnessing a method of social cleansing in which rogue military units operate beyond the law,” said Monica Sánchez, a lawyer at the Judicial Freedom Corporation, a human rights group in Medellín. The group says it has documented more than 60 cases of “false positives” – a subset of the civilian killings in which individuals were killed and then presented as guerrillas in the province of Antioquia.

Researchers also have obtained thorough descriptions of some killings in the small number of cases – less than 50 – that have resulted in convictions this decade.

One April morning in 2004, for instance, soldiers approached the home of Juan de Jesús Rendón, a 33-year-old peasant farmer in Antioquia, and shot him in front of his son, Juan Estéban, who was 10 at the time. The soldiers placed a two-way radio and a gun near Rendón’s body, court records show, and told his son that his siblings would suffer the same fate unless he said his father had fired at the soldiers.

“I still fear this can happen again,” Vilma Garcia, 35, Rendón’s wife, said in an interview in Medellín, where she and her children fled after her husband was killed. The five soldiers involved were recently convicted on charges of homicide and torture, in connection with the threats to her son. “The soldiers think we are poor and worthless,” she said, “so nobody will care how we are killed.”

The civilian killings have opened the United States to increased criticism because it is required to make sure Colombian military units have not engaged in human rights violations before supplying them with aid.

“If we are receiving aid and vetting from a government in Washington that validates torture, then what kind of results can one expect?” asked Liliana Uribe, a human rights lawyer in Medellín who represents victims’ families.

A senior official at the U.S. Embassy in Bogotá said the reports of civilian killings, both in past years and in recent months, were a matter of concern. “If the facts in some cases do show that parts of the armed forces were taking part in murder, then there should be mechanisms to prevent this from happening and mechanisms to ensure that perpetrators are brought to justice,” said the official, who was not authorized to speak publicly on the matter.

The official said the units involved in the most recent killings – the 11 men from Soacha – had not received aid because they had been deemed not credible to receive it.

But the official did not confirm or deny the contention that almost half of the reports of civilian killings in 2007 involved units that had received U.S. aid, explaining that a case-by-case review of the episodes had not been carried out by two American contractors hired by the State Department to help vet Colombian military units for human rights abuses.

Altogether, the attorney general’s office in Bogotá said it was investigating the killings of 1,015 civilians by security forces in 558 episodes unrelated to combat. Prosecutors said the number of new cases under investigation climbed to 245 in 2007 from 122 a year earlier.

The increase in reports of civilian killings spurred the Defense Ministry to issue a directive last year explicitly prioritizing the capture of rebels above combat kills.

“A terrorist captured alive is a treasure, while a dead terrorist is just one-day news,” Padilla said, citing the example of Nelly Ávila, a FARC commander who surrendered this year and began collaborating with her captors. “A terrorist converted into an informant is useful as long as he or she lives.”

Until the latest wave of killings, it appeared that the new policy was starting to work. The Center for Research and Popular Education, a Jesuit-led group in Bogotá that maintains a database on human rights violations, documented 87 reports of false positives in the second half of 2007, a 34 percent drop from the first six months of that year.

But the cases in Soacha and elsewhere suggest that the problem may be more systemic than once thought.

Some human rights researchers contend that the killings are tolerated by some senior officers in the army who chafe at greater scrutiny at a time when security forces have made significant gains against guerrillas, including the killing or capture of several top FARC commanders this year.