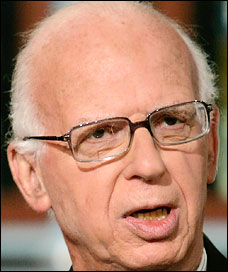 In one of the most drearily predictable media developments ever, David Broder today — yet again — joins in with an endless string of establishment pundits to demand that there be no investigations by the DOJ of war crimes and other felonies committed by the Bush administration. The one silver lining from all of this is that it has clarified a crucial political fact: most establishment “journalists” don’t believe in the rule of law for political elites — period. They believe high political officials should be able to break the law — commit felonies — and be immunized from legal consequences. To any reasonable observer, that is simply no longer in doubt. Opposition to investigations — especially for the real culprits as opposed to low-level interrogators — is as close to a unanimous media view as something can be (though the NYT Editorial Board today, standing virtually alone, calls for full criminal investigations, including of high-level Bush officials).

Broder claims he “agree[s] on the importance of accountability for illegal acts and for serious breaches of trust by government officials — even at the highest levels.” As examples of this “agreement,” he cites this: “I had no problem with the impeachment proceedings against Richard Nixon, and I called for Bill Clinton to resign when he lied to his Cabinet colleagues and to the country during the Monica Lewinsky scandal.” But he then goes on to boast that he supported Ford’s pardon of Nixon. He thought the prosecution of Lewis Libby was “silliness.” He simply believes that “the rule of law” is only for ordinary Americans, not for powerful political officials who commit felonies — and in that, he’s completely typical of the Beltway mindset. It’s not an accident that he’s the Dean of Washington Journalism; he is a perfect embodiment of that culture.

That media elites — ostensibly devoted to accountability for the powerful — fulfill the exact opposite role by demanding immunity for their lawbreaking is why elite lawlessness is so rampant. But that’s well-established by now, so I want to focus on another point raised by this Broderian opposition: a completely self-serving falsehood that lies at the core of the debate over investigations. The standard claim made by investigation opponents in the media is that we all know that torture is abhorrent and that what was done is terribly wrong, but that prosecutions would just be too disruptive. Broder asks: “Ultimately, do we want to see Cheney, who backed these actions and still does, standing in the dock? . . . The cost to the country would simply be too great.”

But it’s simply not true that these journalists vehemently objected to torture as abhorrent but now merely believe prosecutions are an over-reaction. The reality is that they did not object to the torture regime as it was implemented. They did the opposite: they mocked those who objected to it and who tried to stop it as overheated, hysterical, fringe leftists — as Broder did in a November, 2004 Op-Ed, deriding as “unhinged” those who were arguing “that ‘the forces of darkness’ are taking over the country.” …

WaPo Rape Apologist George Will Needs to be Fired
Jun 15