Complicity and Denial: The Problem with Unit 731 - The Constantine Report
0 SHARES

American Terrorism » Complicity and Denial: The Problem with Unit 731 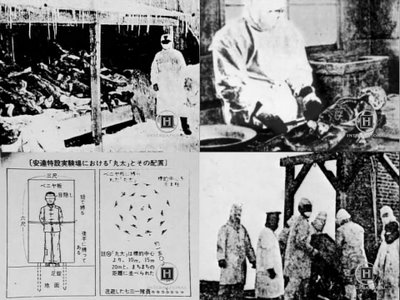 Medical experiments are conducted on human subjects all the time. History’s record on this is a dark one. Japan’s less than glorious contribution to experimenting on human subjects is Unit 731, a lethal outfit kitted out to experiment on captured prisoners during, and in truth before, World War II. The current excavation being undertaken at a former medical school in Tokyo were prompted by the revelations of a former nurse Toyo Ishii that she assisted the burial of body parts as American forces began moving in on the capital after August 15, 1945.

Health Ministry official Kazuhiko Kawachi is indifferent about the whole exercise, despite the location being near a mass grave site that was discovered in 1989. ‘We are not certain if the survey will find anything. If anything is dug up, it may not be related to Unit 731’ (Huffington Post, Feb 20). It is fitting to note that the investigation conducted on the findings in 1989 revealed nothing conclusive, only that the victims had been ‘non-Japanese’ Asians and that they had been subjects for ‘medical education’. Kawachi’s department has refused to allow Chinese relatives who lost members to the unit to have DNA tests done on the remains. Kanagawa University professor Keiichi Tsuneishi is more confident that a link might exist between the activities of Unit 731 and the victims. The logic is childishly simple – the site was the unit’s research headquarters.

The history of the unit stretches back to 1932, when it was founded by an energetic Japanese army doctor by the name of Ishii Shiro near Harbin in northern Manchuria. The name it was saddled with came into being in 1936. Work done on the unit reveal a resume rich with death. Through the 1930s, the effects of various diseases were examined. Cyanide and mustard gas were also added to the list. The victims were rich and varied – Russian soldiers (both White and Red) and Chinese in mid-1938. Chinese soldiers were the recipients of plague-infested feats at Ningpo in 1940. Biological agents made their appearance in assaults on Chinese forces during the early 1940s, resulting in tens of thousands of deaths. (No comprehensive number is available.)

Not content with stopping there, the unit also practised vivisection, limb freezing to test durability of the victims and regimes of malnutrition. Then came the liberal use of high pressure chambers, live burials and the injection of air into veins. All in all, an estimated 10,000 victims may have made their way into the clutches of the curious Ishii.

Tempting as it is to condemn the practices of that particular unit in isolation, complicity did not stop in the laboratories. This is not merely a battle of the textbooks on Japan’s particularly sanguinary war record. Any findings that were obtained by Unit 731 duly made their way into an excited scientific community amongst the victors. Knowledge of the extensive nature of these experiments can be gathered from a report to FBI Director J. Edgar Hoover in March 1956. It is a document that is discussed in a colourful history of the unit by Peter Williams and David Wallace from 1991, suggesting awareness of the experimental data available at the conclusion of the conflict.

Brigadier General Charles Willoughby, head of G-2, the intelligence unit of the occupation forces in Japan, noted that the unit’s ‘research’ provided ‘the greatest value’ in bacteriological warfare. The exchange between not prosecuting Ishii and his colleagues in return for the results of their ‘laboratory tests’ was a mere ‘pittance’.

Lieutenant General Ishii duly escaped the workings of the court. While the work by Williams and Wallace has it documented problems, the failure to account for the unit’s actions at Tokyo is glaring. An even earlier revelation in 1981 by John Powell, referring to Russian documents from a trial of Japanese biomedical personnel at Khabarovsk in 1946, is another reminder on how much evidence was ignored. As Justice B.V.A Roling, former judge of the International Military Tribunal for the Far East duly noted, ‘It is a bitter experience for me to be informed now that centrally ordered Japanese war criminality of the most disgusting kind was kept secret from the court by the US government.’

I’ve often wondered what happened to the technology behind that filter – “Factories of Death”‘is a valuable book, although horrible in its story.

Professor [Sheldon] Harris mentions in his book [“Factories of Death”] that there are suspicions that emperor Hirohito belonged to the financiers [of unit 731], since he had a separate fund for special weapons. Hirohito was a marine biologist and had a wide interest in scientific matters. It is certain that Ishii and Hirohito have met at least two times. It is not clear how well they knew each other, but during one meeting Ishii wanted to show how good the water filter was which he had invented and he offered his divine excellency water which had been filtered from his own urine. Ishii of course counted on Hirohito’s scientific interest. Although Hirohito refused, it is precisely the confidence which Ishii had that Hirohito could possibly accept such an offer which is interesting. Ishii may have been excentric, but in my view even only rumors about an insult to the emperor – which would mean blasphemy – would have cost Ishii his life. Not only are unit 731 and unit 100 the only military units in the whole Japanese military forces of which the establishment was assented to by imperial decree, in 1936, but both units received a decoration with the emperor’s seal on it in 1939. And in 1940, after their “urine incident”, Ishii got [a]…personal decoration from Hirohito.