Chile: The Other 9/11 Anniversary - The Constantine Report
0 SHARES

American Terrorism » Chile: The Other 9/11 Anniversary

Chile: The Other 9/11 Anniversary 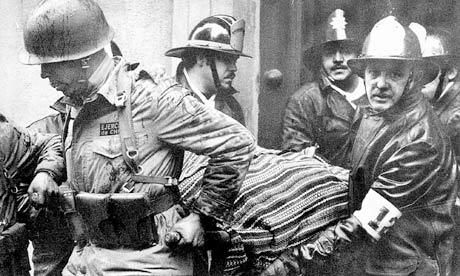 The body of Salvador Allende is carried from the destroyed presidential palace of La Moneda, Santiago on 11 September 1973. Allende committed suicide before he could be captured. Photograph: El Mercurio/AP

Of the many military coups faced by the republics of Latin America, it is the coup of 11 September 1973 that has engraved itself most permanently on the collective memory. The images of the bombing of the Moneda Palace, of the despair on the face of Salvador Allende shortly before his suicide, of the defiant expression worn by Pinochet behind his dark glasses and of the public burning of books that circulated around the world and became the symbol of military brutality.

The dispersal into exile of 200,000 Chileans, most of them to Europe, added to the media images of men and women who had seen their lives destroyed by the death or disappearance of friends and relatives. The murder of thousands of political opponents and the detention and torture of people who were identified with the constitutional government isolated the military regime internationally.

The coup was supported by the US government of Richard Nixon. But after 1977, the Carter administration distanced itself from Pinochet because of his repeated violation of human rights. The regime remained in power for 16 years, becoming one of the longest lasting military dictatorships in Latin America, and it almost certainly introduced more changes than in any other country. Economic policy took a radical neoliberal turn under the influence of Milton Friedman. Allende's nationalisations were reversed and a programme of privatisations was introduced, together with the elimination of tariff barriers; this, alongside the banning of trade unions, produced a dramatic fall in real wages and an equally dramatic increase in business profits.

During Pinochet's time there was a massive influx of foreign capital, which produced both significant economic growth and widening inequalities, most notably during the crisis of 1983 when unemployment reached 30% and 55% of the population fell below the poverty line. Despite all this, it could be said that the dictatorship was successful in economic terms, reversing the balance of social forces in favour of a business sector that enjoyed the unequivocal support of the state, for example in the forestry sector.

Although it defended the neoliberal ideas of the Chicago School, the military government did not privatise the copper mines. In 1976 it created the National Copper Corporation (Codelco), which merged the nationalised mining companies and became the world's largest copper producer. In 1987 it drove through a copper law, which diverted 10% of copper exports to the armed forces budget.

The armed forces thus became a powerful force with a capacity to exert pressure on society and the state. None of the governments that were elected after the restoration of democracy in 1990 were able to change that legislation, which made Chile's armed forces the second most powerful in the region after Brazil, with the highest military spending as a proportion of GDP (according to the Military Power Review).

The legacy of 11 September 1973 goes far beyond the economy and the armed forces. The dictatorship's most devastating long-term effects are in education and the question of the Mapuches, Chile's southern indigenous people. Pinochet pushed through the education law just four days before leaving power; it placed the responsibility for education in the hands of the private sector at the same time as allowing complete freedom to create educational centres. The result was the deterioration of the quality of education, while making it prohibitively expensive. Working class people now struggle to get into university and have to make do with municipal secondary colleges – in other words, a second class education. In 2006 the so-called Penguins movement (thus named because of their school uniform) mobilised half a million school students in support of the de-privatisation of education and the rescinding of the law.

The case of the Mapuches is even more serious, since it affects a population of over a million people who have lost their land and whose civic rights are restricted. When the Mapuches have in the past taken collective action, the anti-terrorist laws sanctioned by Pinochet have been used against them.

Young Chileans are not interested in politics in the way their parents and grandparents were: 95% of 20-year-olds do not vote. They know they cannot change the world by taking up arms or achieving victories at the polls and they have no faith in professional politicians. Yet neither are they happy with the current situation. Perhaps that explains why there are in Chile hundreds, perhaps even thousands, of small groups devoted to cultural and social activities that can affect the immediate situation. It is, now, politics in a different form.