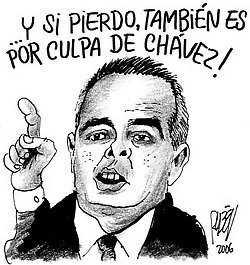 Venezuelan President Hugo Chavez took a big step closer Thursday to his stated goal of putting his last rival for the presidency, Manuel Rosales, behind bars.

CARACAS – A prosecutor petitioned the judicial authorities to issue a warrant to place Manuel Rosales, a prominent opposition figure, in custody on the basis of alleged corruption while he was governor of Zulia state in western Venezuela.

Rosales is currently mayor of Maracaibo, the state capital of Zulia, and before that governor of the state for two consecutive terms. He also challenged President Hugo Chávez at the elections in 2006, and while losing by a margin of three votes to two, did better than many observers had expected. In the process, he established himself as a key figure and de facto leader of the opposition.

Prosecutor Katiuska Plaza announced that she was seeking the custody order from the judiciary in Zulia on the basis of accusations leveled by the National Assembly against Rosales. The National Assembly is almost entirely dominated by Chávez’ ruling United Socialist Party of Venezuela (PSUV) and its allies.

The charges contemplated in Plaza’s petition were reckoned to imply jail sentences ranging between three and 10 years on conviction. Rosales has faced a flurry of accusations, many of them vague or as yet not filed at a court, since he went up against Chávez for the presidency.

Since then, and on more than one occasion, Chávez has vowed publicly that he intends to put Rosales behind bars. In December, Chavez announced that he was "determined to put Manuel Rosales in jail." Before the November election, he had threatened to launch "a military plan" against Rosales if he won. He has also threatened to "wipe [Rosales] from the political map."

Recently, he’s extended that threat to the opposition governors of the state of Zulia (Pablo Pérez), Carabobo (Henrique Salas Feo) and Nueva Esparta (Morel Rodríguez) after they attacked the legality of his takeover order of ports, airports and highways in their states.

Reacting to the news, Rosales dismissed Plaza’s move as a response to “an order from Chávez” and said he’d fight against it in all ways possible. “I’m going to meet with the lawyers and we will study the document that they presented,” he said in a lengthy and blistering statement to the media. ...